”There’s nowt so queer as folk” they say. I would disagree – “There’s nowt so queer as trends” I would riposte. For some trends are so inexplicably unattractive, so incredibly low on aesthetic value or grace that their existence is physically shocking. I last wrote of my sartorial prejudice in relation to summer clothing; this ‘outing’ of personal taste (and indeed distaste) has no excuse. It is an outburst, a volcanic eruption, likely caused by the bottling of emotions; bottle and carry anything effervescent around for long enough and it tends to explode. 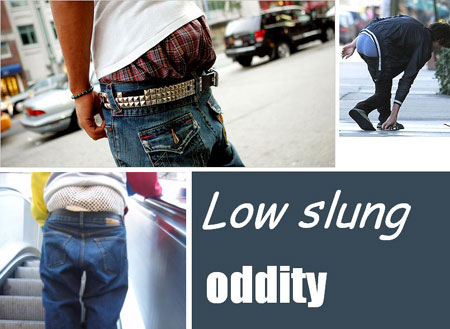 I was launched into a state of exasperation and despair when I happened to see a considerable number of young men walking around with their jeans secured (barely) not at their waist, or even their hips or even halfway down their buttocks but at the very top of their thighs; the effect was that virtually all of their underwear was visible to any person walking behind them, especially when walking up the stairs. The jeans themselves are generally denim of an ordinary blue but, due to their odious wearing position, are utterly shapeless and overly full. They make the wearer look slovenly, even though he is likely to have taken considerable pains to maintain the jeans at this position and even more pains to keep his snow-white training shoes ‘splash free.’ The worst thing, a complete reversal of the logic of fashion, occurred when I saw one of the young men, self-conscious about the height of his jeans compared to his companions, push them down further – such conscious effort to make oneself look like public masturbator! Bizarre. 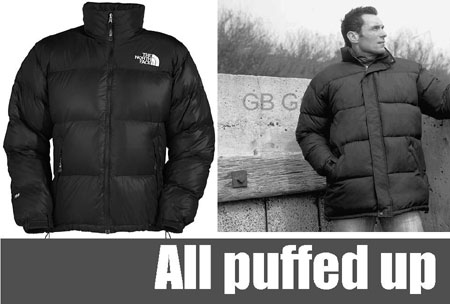 If there is one thing I can credit myself with, maturing from the age of brand-lust and trend obsession, it is that I finally began to recognise the importance of shape and silhouette. Puffa jackets are an abomination; the notion of wearing an overstuffed duvet has long baffled me. I do acknowledge that there is a practical purpose to filling the interior of a coat with goose down, but there are more elegant and better-looking ways of keeping the cold away. The lumpy puffa, with the squeaking sleeves, is one of the most disappointing sights; that it covers a human torso, a design of nature that should be accentuated and complemented, is a tragedy. 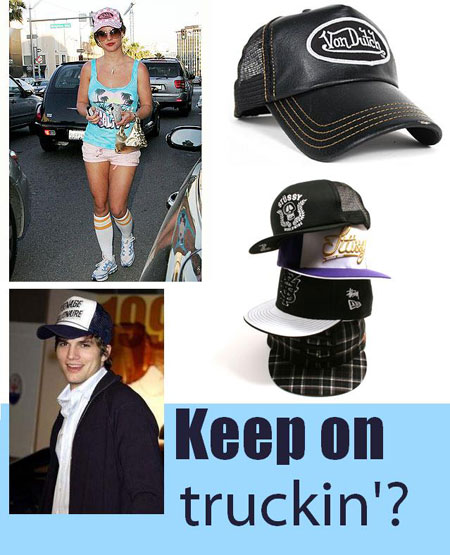 Trucker caps, which an acquaintance names as “white trash toppers”, are one of the most irritating trends ever to dominate the accessories departments of clothing stores; that there are scores of better designed items of headgear, from talented, dedicated and tasteful milliners, that have never received the reassuring popularity of the humble baseball cap is bad enough but that the bastard child of the classic baseball cap the ‘trucker’ should figure so prominently, under tiresome, drolly named brands like Von Dutch is frankly mindboggling. The aesthetic itself is cheap and greasy and the value added to any ensemble is at most infinitesimal; but that we have come to this, the wilful worship of trashy personalities who pair overtly expensive French luggage brands with such fripperies of the most meagre irony is far more worrying.