The Pocket Square is the New Tie 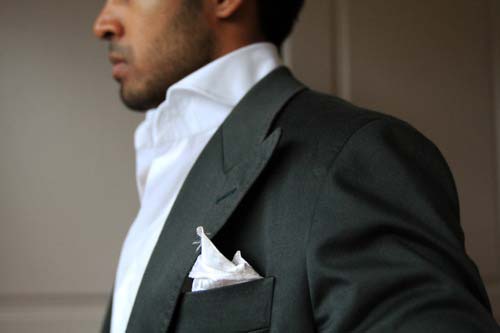 “You’re wearing a tie, are you?” my friend asked. There was no surprise in his voice. He knew my proclivities regarding clothing. There was, however, a crackle of concern.

It was a Saturday night. We were going out in a smart district of London. To me, a tie seemed appropriate. I informed my friend, who was tieless, that he was underdressed. “Yeah, but” he began “no one wears ties anymore, do they.”

“And what would you wear?”I asked him, regarding his blazer and cord ensemble, accented only by a coloured shirt and a pocket square puff.

It was a pointless question of mine. His chosen ensemble was as far as he would go, and not just on a Saturday night. “I don’t really wear ties any more, unless I have to.”

‘Unless I have to’ is the sad subtitle to the tie’s decline. Although I always hope for a complete revival, for all men to take pleasure in decorating their person, to enrich their palette with a superior arch of fine silk, the sad truth is that most men nowadays think that the tie is unnecessary. Even the chic gentlemen of the town, those blessed with a splatter of sprezzatura, often dispense with the tie. But why? How could these knights of style do without such a long-standing friend? How can they combat indifference and inelegance without a ‘blade’?

The answer is simple; the pocket square.

The resurgence of the pocket square was always seen to be an advance for men’s style. A return to the days of accepting gentlemen with feminine gimcracks, a rejection of the utilitarian and an embracement of all that is splendid and superfluous.

However, the square is a sneaky devil. Despite the early alliance with the tie, and the natural pairing of the two, the reality is that, for many, it was a replacement for the tie, not a partner. And it’s not hard to see why. A man can still cut a figure of casual elegance with an artistic puff in his jacket pocket, and now that they have become so commonplace, even the fearful are more prepared to stuff in a square of silk than knot a tie.

This is not a usurping which I rejoice in reporting. In fact, I am rather disappointed that the pocket square’s return has weakened the hold of the necktie rather than strengthen it. That a man can now be considered ‘overdressed’ for a business meeting by wearing an open-necked shirt with a polka dot handkerchief, says a lot about the demise and of the necktie and an increasing desire to de-formalise every aspect of clothing.