“A little imagination” my dear old grandmother tells me “goes a long way.” Of course, she was right, although I am slightly piqued that my overly fertile imagination has frequently left me high and dry in the realm of dreams whilst my companions, keen to step ahead, have wisely pursued their manageable ambitions in the doldrums of reality.

If necessity is the mother of invention, then imagination is surely the rather caddish father; for where would modern transport systems be without the imagination of people like Isambard Kingdom Brunel or music without Bach. I stand by imagination as something fine and cerebral. It sets one out from the crowd.

Indeed, setting yourself apart from the crowd is possible with even the most basic of apparel. The polo shirt and the Rugby shirt; simple and innocuous, if a little dull, are two favourite items of clothing for the spring wardrobe.

Technically speaking, they constitute ‘sportswear’ since they were designed and made for sport. However, you’re just as likely to see either one worn on Fifth Avenue as on the field of tourney. They are accepted as being ‘slightly smarter’; more preppy and dare I say elegant, at least in comparison to the nylon shorts and tracksuit tops that bulge from the sportsman’s wardrobe.

You could wear these items rather simply: over t-shirts with casual khakis or denim and deck shoes or you could impress women like my matriarch of a grandmother with more imagination. 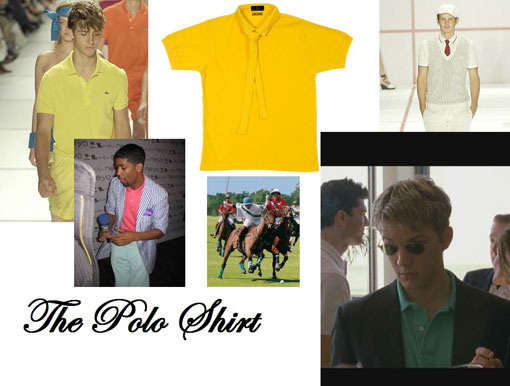 Though the polo shirt is definitely not something to wear formally, it has certainly upgraded itself year after year, no small thanks to retailers like Lacoste and Ralph Lauren who do battle each summer on the terracotta breakfast terraces of luxury hotels (to me, nowhere has there been a more palpable sense of competition between these mighty brands).

They are generally worn rather slovenly, with swim shorts and flip flops in the summer or sweatshirts and jeans in the spring. However they look at their best when assisted by blazers, smart trousers and vests.

It’s very important that the polo shirt is clean, crisp and fitting; baggy shirts under smart jackets look abominable and it’s a good idea to keep it plain. Another tip: use the collar. It’s oh so chic when the polo collar is worn outside the blazer.

Another unconventional look for the polo shirt is, come summer time, wearing it with a slim tie. Though this sounds like a mismatch of styles, it can come off very well although it is important that the polo shirt is a slim-fitting shirt and that the tie is also plain and very slim – fat kipper ties look absurd with polos. Worn correctly with some short tailored shorts and some sleek loafers (no socks of course) and an unbuttoned cardigan, it looks alternative, original and yet instantly classic. Thick, hardy and comfortable – the Rugby shirt is not exactly the customary addition to the style man’s wardrobe, but it is for more casual looks and like the polo, it has heritage in use and design. Retro sportswear is everywhere this spring, as it has been for the past few years so the very English, very preppy Rugby shirt would be a sensible purchase.

In England, Rugby fans frequently wear them short sleeved with the logos and sponsors emblazoned on breast and arm; rugby of old was far more minimalist in terms of adornment – Ralph seems to have the right idea on this one: simplicity and classicism united, the only adornment is a number or two, the trademark pony or a very elegant crest.

Normally they are worn on their own, or worn over white t-shirts with jeans or chinos, which is certainly not an unpleasant look, but easily bettered. Wearing a striped or checked shirt with a plain Rugby shirt is charming, especially if shirt cuff is also on display and adding a crested tie or even a bow tie takes the ‘rugger’ to that next level; no longer is it a humble item of leisurewear, for being seen in the same company as silk dicky bows and ties, it receives accolades and respect.