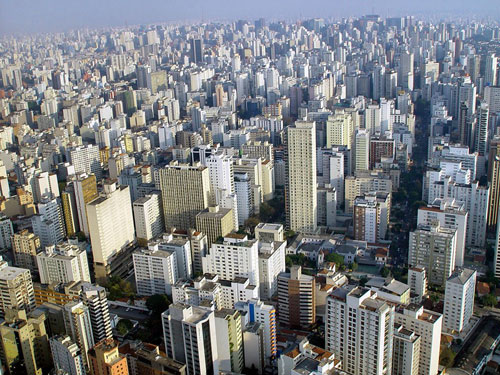 When leaving São Paulo, I contemplated my extraordinary experience in South America’s largest city, the ‘second’ city of Brazil and the 4th largest metropolitan area in the world.

Though much feared by Westerners for the kind of wanton crime that only grinding, hunger-stricken, barefooted poverty can bring, ‘Sampa’ is known by Brazilians as the cultural city, the sophisticated brother to the sand and samba of Rio. Here are the museums, the concert halls, the Brazilian headquarters of international companies; there are luxurious shopping malls, art galleries, Pellegrino-listed restaurants. “Here” said the taxi driver, smiling into the rear view mirror “here the money is, you know.”

Above the hundreds of tower blocks and mini scrapers is one of the busiest metropolitan air spaces in the world. The world’s second largest fleet of helicopters ferry the city’s business elite from the tropical greenery on the edge of the city to the grey centre of the concrete jungle. On the ground, the streets are gridlocked with every kind of vehicle from high end Rolls Royces (that command prices of $2m) to worn out jalopies, streams of white taxis and noisy bendy buses.

“Everyone has a car in São Paulo” a Paulistan told me, nonchalantly. And they certainly need it. When I informed one of them that I had walked from the Jardins district to the old centre, they informed me that I was either brave, stupid or both. “It took me two hours” I exclaimed, seeking justification that my hotel was not as central as it should be. “There is not one centre in São Paulo” she said “there are many.”

However, walking around the city afforded me better observation of the people that make this enormous city what it is. “Paulistans care about how they look” a well-spoken waiter told me in a hushed voice “they are very proud here.” Walking down the Rua Oscar Freire, which Paulistans claim is their Rodeo Drive, the wealthy and well-dressed (some of whom are one and the same) promenade with the panache of European urbanites. However, the degree to which their style has progressed was disappointing and rather predictable. Badges are clearly the most important asset to São Paulo’s ambitious citizens and the love for sartorial bling-bling reminded me of the Costa Smeralda on its trashiest of Eurotrash days.

Like the cars that zoom down its finer streets, Paulistans attire is about conspicuous consumption. Every now and then, there is an elegant dress or a smartly casual ensemble. However, most of what I saw reminded me of the fact that this bold ‘new’ country, in the middle of a credit bubble, is still catching up.

Suits are neither appropriate for the climate nor of elegant cut. Even the monied seem to shuffle around in shiny black three-buttons, often with button-down collar shirts. In smart restaurants on warm days, I didn’t see a single casual jacket – linen or otherwise. Chaps were either excessively casual in shorts and designer polo shirts or straight from the office in unbuttoned shirts and curiously baggy suit trousers. My quest to find a tailor was a failure.

Walking around in white cotton trousers, a sky blue shirt, navy tie and stone linen jacket attracted the curiosity of the Paulistans, although their reactions were those of surprise and interest rather than the sneering cackles of Sydneysiders. This reminded me that São Paulo is evidently still a place with European pretensions. Elegance is aspired to here, even if the sticky tropical heat and thunderous rainshowers suggest otherwise.