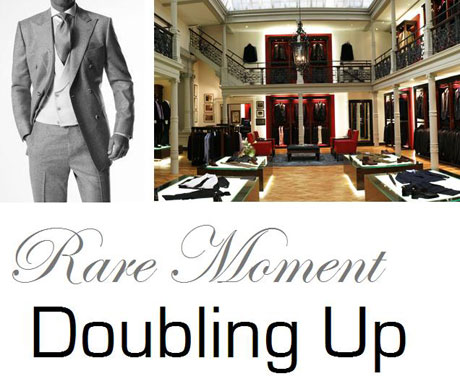 It is always wise, I find, to revisit and reassess our convictions from time to time. The words ‘never’ and ‘always’ are a little overused and misrepresentative as they are impossible to qualify. Recently, I wandered into Gieves & Hawkes with a friend of mine. The last time I had gone in, the store was intimidatingly empty, the stock overpriced and dull. The glorious window display belied a remarkably uninspiring interior; never again, I thought, will I judge a book by its cover. My recent trip could not have been more different.

To begin with, I was not drawn in by a deceptively grand window display but from a general curiosity and a desire to gather ideas. I had expected the same ‘store in decline’ offerings and was, instead, very pleasantly surprised; jumping from rack to rack I repeated continuously ‘Now, this is a lovely fabric’ to my companion who became rather bored with my monotone and wandered off to the high priced, high end racks of suit ‘sets’ – jackets, waistcoats and trousers. Flicking through a selection of classic blues and greys we chanced upon a peak-lapelled grey window check suit in a soft but substantial English wool. My companion was unmoved and, after I had shown my approval, remarked that he was not a fan of checked suits. Despite this, I pulled the item from the rack and suggested that we have a look at the waistcoat.

‘And I think we’ll find that it is…double-breasted!’ I exclaimed euphorically. My friend had not even allowed me to finish before he had interjected; ‘Wow’ he said ‘you really…didn’t expect that. It’s…really nice.’ It was indeed. A shawl collared double-breasted waistcoat, it was completely unexpected but entirely fitting; it was a rare moment of unforeseen perfection. There was something in the way the jolly checked wool contrasted with the formality of the double breasted option; I immediately imagined it with a cornflower blue shirt, a paisley tie and a gold-chained pocket watch. It was merely an attractive suit before the jacket was opened and the waistcoat revealed; now it was the suit.

Other suits caught my eye; a pleasant grey on blue chalk stripe with brown buttons and a Prince of Wales checked double-breasted, again with brown buttons but not even the classic beauty of these items could divert from the distracting and charming incident that had affected us both. On leaving the shop my friend remarked that the double breasted waistcoat was, from now on, the choice for him as I considered the suit in its entirety; the lapels had to be peaked, otherwise it would not have worked and it was not merely the ‘double-breasting’ that was ‘arresting’ but the humour of the check and the waistcoat together. As rare as this style of waistcoat is, it was the combination that made it rarer still.