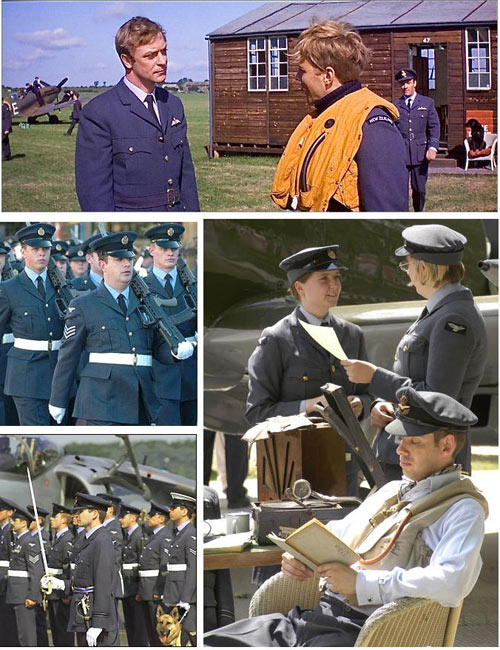 I’m continuing to dither over the choice of my next bespoke suit. I’d thought I’d settled on either a casual weekend check; a modern box cut suit in cotton or cord; and, finally, a grey or navy chalk stripe.

These choices, as you may remember, were causing me an ample sufficiency of headaches, in terms of coming to the point of decision. I guess this is one drawback to always thinking in pictures; you can too readily imagine how each suit would look and easily become enamoured of the picture.

This happened to me again recently with the idea of an RAF Blue suit.

The first official Royal Air Force uniform was made of a pale blue cloth and completed with gold trimmings. It’s rumoured that the cloth for those uniforms was originally intended for the Tsar of Russia’s household cavalry but became surplus to requirement after the revolution. A nasty and impractical colour it wasn’t popular with personnel and was quickly replaced with a uniform made of a blue-grey cloth that remains the RAF’s standard dress kit to this day.

That distinctive blue-grey colour, known for obvious reasons as RAF blue, has been a favourite of mine for many years. Even in the form of a standard suit in my view it conjures up images of rakish gents, open top sports cars, and polka dot scarves; the perfect caricature of a WWII spitfire pilot.

While you’ll rarely see an RAF blue suit on the streets (another reason for adopting it) it’s a far easier colour to match than you might think. It works well with white, cream and other shades of blue – particularly so in the form of a Bengal stripe. This allows an ample number of shirting options. It also suits chocolate browns and tobacco, which again provides plenty of diversity with regards to footwear. You might also consider various shades of green, which could mean wearing it under a Loden coat or as in my own case an M65 jacket – as discussed recently.

I used to be indecisive, now I’m not so sure.