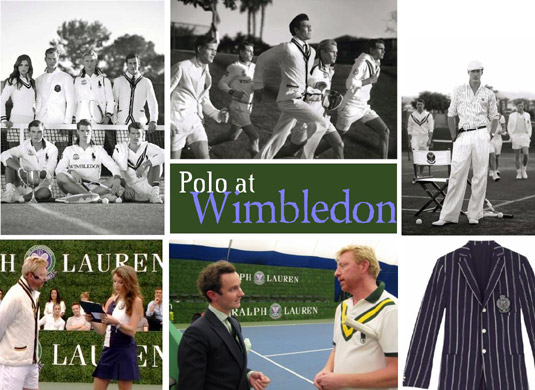 It may seem odd to some that one of the most noticeable symbols of the most high profile racquet sports tournament in the world is a polo pony. Ralph Lauren, celebrating its fifth year of kitting out the court at Wimbledon, would contend that the eponymous logo is not a representation of the sport it depicts but merely a recognisable icon of its own brand, a brand which has dominated the high American aesthetic for decades; a multi-billion dollar behemoth that reincarnates, rather spectacularly, an improbable Gatsby-esque existence.

Ralph Lauren likes spectacles and spectacular people, so it was scarcely surprising that they had secured the services of flame-haired tennis champion Boris Becker who struts his considerable stuff in Lauren labelled attire as brand ambassador. As part of his duties, Boris recently conducted a Legends Clinic, held at Dukes Meadows in Chiswick, West London broadcast live on RalphLauren.com. Having acquired a formidable bank of knowledge from his successful career, the still-fit Boris eased through the gears whilst simultaneously offering a level of garrulity and wit rarely seen in the television studio, let alone on the tennis court.

Boris appeared on court in a pair of plain white shorts, polo shirt and cable cardigan, sporting a strange pair of socks that looked more like bandages. The cable cardigan was the stand out item; trimmed with navy and yellow, it looked like a heritage piece from the era of Fred Perry. Underneath was a creamy white polo with a varsity style green and yellow chevron and an alarmingly enormous polo player logo, which now seems to be the default for Lauren’s polo shirts. This year’s aesthetic for Wimbledon is much the same as last year’s offering; Merchant-Ivory costumes covered in antiqued insignia. It’s a formula that works well – the derivative but handsome garments appeal to the aesthete, the logos and branding to the fanboys.

Boris told me, enthusiastically, that Ralph Lauren is a perfect fit for Wimbledon; “It’s things like the cardigan, you know?” he said smiling “Heritage things; that’s what I love about it.” Asking him to compare his former sponsors Fila and Ellesse to Ralph Lauren, Boris said diplomatically that Fila and Ellesse were good for sportswear, whereas “Ralph Lauren is completely different.” Such a generic comment, from a man of great conversational art, indicated he did not want to get too drawn into yah-boo-sucks commentary on brands, which for a brand ambassador was refreshingly diplomatic.

I think Boris is right. Ralph Lauren is the perfect partner for Wimbledon. Whether they like it or not, they are both brands which complement the other perfectly; Lauren leans on associations with ancient tournaments to give credence to the heritage aestheticism and Wimbledon, though never lacking in glamour, finds comfort in clinging to an official sponsor grander than Slazenger. The collection itself is simply a wistful man’s fantasy of how Wimbledon should be; a cross between Strangers on a Train and Brideshead Revisited. It’s probably too perfect in conceit, particularly when compared to the hideous dross that is paraded by the court athletes themselves, and some of it is more caricature than character. However, it’s still another warm and poetic reminder of our own heritage – something Ralph Lauren has managed to perfect.