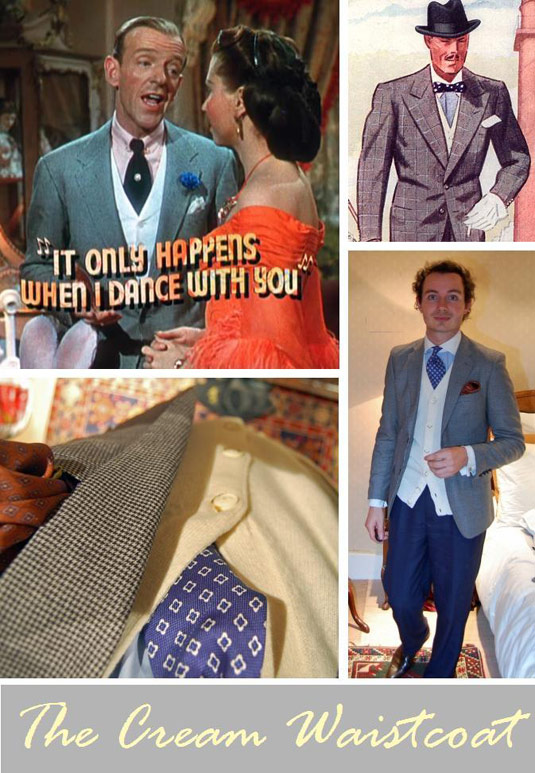 If you told someone you were wearing a cream waistcoat, nine times out of ten they’d ask you whose wedding you were attending; the very idea of a gentleman wearing a significant expanse of cream is closely connected to nuptials. Search for ‘cream waistcoat’ on Google Images and you are confronted with shiny wedding-hire items of questionable taste: my idea of a cream waistcoat is something altogether different.

I have fond memories of watching Fred Astaire films with my mother, remembering that on more than one occasion he wore a creamy white waistcoat as part of his costume. For a young child, it was an eye-catching departure from the dark uniformity of his suit; that bright image of his prancing torso burned into my memory. I have sometimes replicated this look – particularly with odd jackets – not merely in pursuit of nostalgia of a happy childhood but also because the cream waistcoat (or in my case, cream cardigan) adds a purity and more than a modicum of sunshine to dull ensembles.

I recently bought a new cream lambswool cardigan from Uniqlo which I have worn as an odd knitted waistcoat with suits as well as blazers; despite the fact that it is knitted, it has a curious formality – something akin to a Regency buck – that affects the entire ensemble. Though the cardigan can always be worn on its own, it looks better under a suit as it has an appealing severity which breaks the monotony of suit fabric.

It’s difficult not to be noticed with such an unusual break and you will note eyes perusing your attire from a great distance most of which, I assure you, will be complimentary. However, a few people have informed me that cream is not a colour for London gentlemen (or any gentlemen in a metropolis), that it is too effeminate, too theatrical and too dainty a tone to ever be masculine.

Naturally, I disagree with the first assertion; cream was a perfectly acceptable waistcoat colour for Beau Brummell and those who followed him. The latter assertions are a matter of opinion – lighter tones are always considered to be ‘dandy colours’ – but I do concede that cream is seasonal; wearing a cream waistcoat, even a knitted one, in darkest January is somewhat revolutionary and probably ill-advised. However, it must also be mentioned that cream is not an ideal tone for gentlemen who are sensitive or conscious of a bulging waistline as it will have the effect of making it appear larger than it actually is.