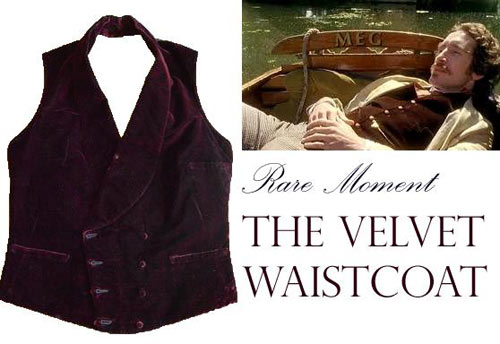 It is comforting to see that season after season, year after year waistcoats still adorn the mannequins in stores up and down the high street. So much for the fashionistas who predicted several years ago that waistcoats were a brief phenomenon; as far as today’s shoppers are concerned, they have never been more desirable. A waistcoat is an elegant, flattering and warm addition to a suit and this practical edge has clicked with purchasers who are looking for more than something that’s “a bit trendy.”

However, it is not only the ‘matching waistcoats’ that have caught the eye; odd waistcoats are becoming less, er, odd and people are using them in very different ways and for different looks. Some are using them as a foil to a weekender outfit, others as a point of interest on a metropolitan suit and all different types of colour, pattern and material are appearing. One which caught my eye recently – and which I simply had to try out – was the velvet waistcoat.

When trying it on with my friend, I marked his frowning surprise at the mere existence of the product; “A velvet…waistcoat?” he said, as I slipped it on for size. I myself was not to be phased by the comment. It might be unexpected, a little rare but that was the point; doing something different was always of interest to me and a velvet waistcoat seemed the ideal addition to my little collection. I remembered seeing them worn by Dickensian rogues in Sunday evening period dramas with frock coats and stove pipe hats and it seemed to me to be a touch extravagant; an ideal starting place for any item that seeks a permanent home in my wardrobe.

Though many would mark this down as an ‘evening only’ garment, I foresaw many occasions for it, despite being jet black and the perfect contrast to Barathea wool and ribbed silk lapels. On the mannequin in store, it was displayed splendidly contrasting with a light grey jacket and a check shirt. However, I saw it being deployed primarily as an odd waistcoat with my collection of grey, waistcoat-less suits; a remarkably fine texture to contrast with wool flannel and silk ties.

Then my mind wandered from it being used with a grey tweed jacket, a check woollen tie and coloured cords to unity with a burgundy velvet jacket, white shirt and bow tie for club dinners and then with jeans, a cord jacket and paisley neckscarf for a casual artisan ensemble. For such an unusual, unexpected item, it was proving to be something of great potential and adaptability. I anticipated its first outing excitedly as I waited in the queue to purchase; I just had to remember to visit Liberty for replacement buttons.