Ravi’s Tailors might not be the most famous ‘distance’ tailors available online but they are certainly one of the oldest.

Founded in 1991 by Ravi Daswani in the Bangkok Palace Hotel, Ravi’s is a singular operation. If the website looks nearly twenty years old, that’s because it is. Back in 1998, Richard James was the darling of Savile Row, the toast of the new generation of bricks and mortar tailoring – at the same time, Ravi’s was setting up an online tailoring platform.

It’s also worth noting at this stage that Ravi’s Tailors is also a good-old travelling tailor. They regularly visit the UK and Ireland for a more traditional measuring service. This is often preferred by many to online-only due to the human interaction. Their schedule for this February is here.

Unlike other tailors, who have developed sleek, minimalist sites with 3D suit builders, professional photoshoots with models and free books of fabric swatches, Ravi’s relies on a more informal method. In much the same way that one might take a magazine cut-out of a film actor to the barber to achieve the desired hairstyle, Ravi’s ask you to supply a few pictures of the kind of suit you want – or choose from the range of styles that are already on the site.

Instead of having radials that change a suit’s design from single to double-breasted, peak to notch lapel or two-piece to three-piece, Ravi’s just ask you to browse through and check whether you prefer the suit worn by Kevin Kline in ‘De-Lovely’ or by Hugh Laurie in ‘Jeeves & Wooster.’ It’s somewhat unsettling to begin with, and you start to wonder just exactly how closely the suit you order will represent that particular style.

You enter an email address, which permits you to go to the next step: fabric selection. There is a very large range of fabrics, many of which have interesting patterns such as window checks and chalk stripes. The swatch images aren’t exactly huge, which is a shame as the swatch books start from £18.75 for a book of 20 swatches.

Following this, there is a good deal of form-filling, but most of it highly beneficial: you can choose light or heavy shoulder padding, exact lapel width, button type (brass, horn mother of pearl etc). Crucially, they also offer two different types of construction: Standard Fused (“the jackets are fused and also have canvas facings for added support”) and Full Canvas (“a ‘floating’ canvas is attached with the silk threads at certain strategic points to ensure the front of the garment is unmarked and no fusing is used”). The latter costs an additional £50, which given the work involved is a bargain.

The suit I chose to review, however, used the standard construction. I wanted a light grey double-breasted design, so sent a few example photographs. I provided detailed measurements of an existing suit and sent them on. The price of such a suit is a rather awkward £296.25.

The suit itself arrived fairly quickly (within two weeks of ordering), although a customs fee was payable. 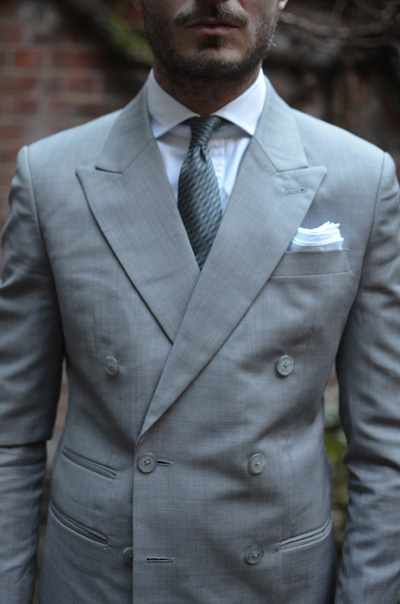 Out of the box (see above photos) it was fairly wrinkled and needed a good steam – unsurprising, given the journey. The fabric is a rather stiff, mid-light weight wool blend; as I had supplied photos of examples, I was unsure of the exact fabric that I would receive. Given my experience in distance tailoring, I’d say that fabric is 60% of the satisfaction in a suit. A good fit is no longer sufficiently impressive and a poor fabric makes an excellent fit irrelevant. Fabric samples help alleviate concerns about fabrics, so I don’t know why these tailoring companies don’t send potential customers a book of fabrics for a very low cost (like Dragon Inside) or at least let them order them and claim the cost back against future orders (like Tailor4Less).

I disliked the standard plastic buttons provided with the suit and, as usual, sought better replacements in Mother of Pearl (see photographs below). 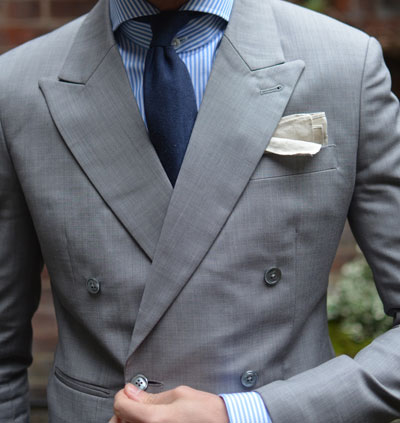 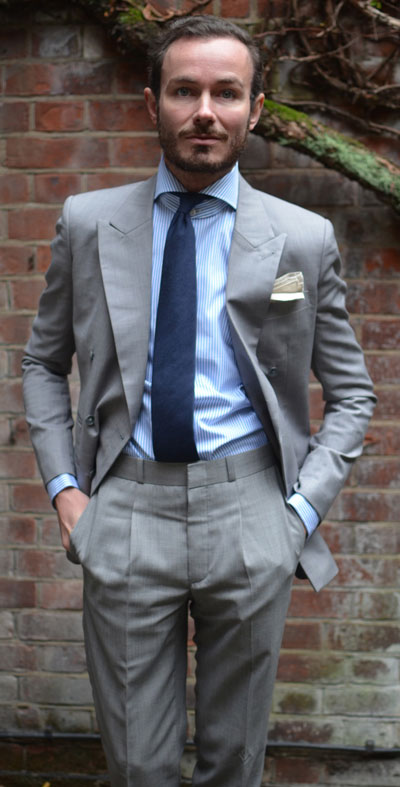 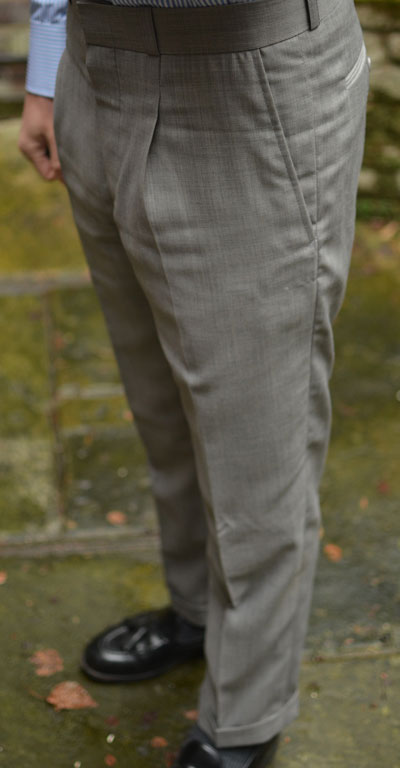 The jacket fit well – perhaps a little too well. It is certainly a nice cut, but is very slim, particularly in the arms.

The waist is actually a beautiful shape, although when the jigger button is secured and the jacket is buttoned up, there is evident wrinkling due to the strain caused by the button positions. I, personally, don’t mind this as I don’t like the flat-board perfection that everyone else seems to crave. However, others would probably wish to have the jacket let out at the side seams.

The lapels are pleasingly traditional (I seriously dislike skinny lapels on double-breasted suits) and the shoulders are lightly padded. The arms are properly set (I had specified my shoulder slope in the order) which means there is little shoulder divoting.

The trousers were slightly shorter than expected – with very little excess fabric to allow lengthening. They were also disproportionately wide compared to the ultra-fitted jacket. I had them tapered all the way down the leg by one inch at an alterations tailor.

Fit: 8 out of 10 – this was a copy of the measurements of a single breasted suit, so it didn’t turn out badly at all. The jacket is a little tight across the torso, with the wrinkling a result, but it is not at all difficult to wear. I think the shoulders and waist shape are particularly pleasing. The trousers were too full and wide for the suit, but now they have been tapered I am very comfortable with the fit.

Fabric: 6 out of 10 – slightly disappointing, middle-of-the-road in terms of quality. Feels a little hard and unfortunately typical of internet tailors. However, they have other great fabrics available, just need to be able to see them before buying!

Service: 6 out of 10 – strange website and ordering process. High charges for swatch books – and you can’t even choose which swatches they send (just the ‘most popular ones’). I also think that they should sort out the customs issues by arranging prepaying of charges in advance. It’s not nice to know your suit has been impounded by the taxman.

Quality of finish: 7 out of 10 – good but not great. Very few stray threads and very neatly finished button holes. For the price point, it’s a tidy suit. Cuffs aren’t working cuffs though and the original buttons were as cheap as they come.

Overall satisfaction: 7.5 out of 10 – this feels harsh as I’m not at all dissatisfied with the finished suit. I like the fit and it looks a lot better in my eyes now that the trousers have slimmed down and there are better buttons. However, the process – and the website – are not at all reassuring. Given that people spend hours in bricks-and-mortar tailors poring over fabric swatches, the inability to choose the fabric samples you want to see and touch is off-putting and the images of 1980s low-end catalogue models wearing boxy suits is, though transiently charming, ultimately unprofessional and disturbing.