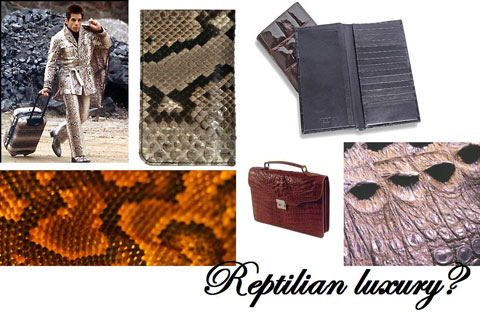 Young children of my acquaintance are often curious about my wallet. And their curiosity intensifies when they learn it is hand made from genuine crocodile skin. They touch it tentatively and frequently flinch in fear when they run their fingers along the large scales. I would have reacted, were I their age, in the same way; seeing a creature’s skin on everyday products is somewhat macabre and terrifying for the young. Even fearsome animals that a child might draw back from in terror are pitied by the children, though they might take a considerable time to admit such pity.

Where or when I became desensitized to the use of reptile skin for whimsical fancy of mankind, I do not know; perhaps a lifetime of a common vilification of crocs and snakes has caused me to not only regard them with fear but also contempt. My wallet does not appeal to many of my acquaintance and some have labelled me both foolish and cruel for ‘supporting’ the trade in animal skins. However, many have expressed admiration and intrigue; ‘There is’ a friend told me ‘something exotic about it; your mind instantly connects with the life of the animal. You see it grinning, sloping off, living and dying…all at once.’

I expect there are those, of strong opinion, who will scoff and deride such romanticism. Of course, it is rather foolish chatter; when one considers the life of a creature has been lost (albeit, according to the documentation, not necessarily as a direct result of the demand in trade for animal skinned accessories), the smoke-ring thoughts of bloated consumers are of scant importance. However, if you are prepared to shoulder the guilty vanity of licensed reptilian products, there are a few things you should consider before purchase.

The glorious texture of crocodile or alligator accessories is hard to replicate; imitation versions can be excellent, but they are usually no match for the real thing. Croc and gator skin is tough – very tough indeed – and no stiffly reinforced leather can measure up to it. This makes it, for items that pass in and out of pockets and bags, slide across hard tops, fall and tumble down abrasive surfaces, extremely practical; the gator or croc wallet is a classic and has been an acceptable form of money-keeping for almost a century. Likewise small items of luggage, though they are usually prohibitively expensive, manufactured from crocodile or alligator will last an incredible number of years. Other accessory items such as belts can be tasteful and even magnificent but that is where I would draw the line.

Crocodile or alligator shoes, whether they be made by an amateur cobbler in Bangkok or a master from Lobb, are, to me, the image of vulgarity. Though it might be true that they are also hardwearing, the croc shoe epitomises a brash, tasteless sort of man; the sort that pours vintage champagne over the bodies of sweating prostitutes, and the sort that personalises his number plates according to the chronological order of his vehicles.

Though it had never appealed to me, my antipathy to snakeskin products was affirmed when I saw Derek Zoolander, played by Ben Stiller, pacing towards his distant and disapproving family in an entire snakeskin ensemble, with matching luggage. Whereas alligator and crocodile skin is hardwearing and very longlasting, snakeskin is actually rather fragile. And though Stiller’s costume was most certainly imitation, the patterns were actually rather ghastly on such a scale; snakeskin products do not have the subtlety (yes, subtlety) of gator or croc skin. When I see a snake belt or snakeskin boots or shoes I see a product that is neither practical nor attractive. And despite the relative expense and rarity of snakeskin, it always cheapens an ensemble rather than enriching.

Although I may be vilified for owning a croc skin wallet myself, I stand by the summation that while using the skin of some of the earth’s creatures seems barbaric and unnecessary in this day and age, the combined beauty and durability has been extremely hard for man to replicate.