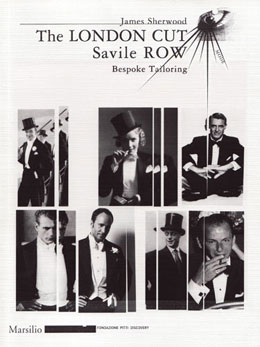 Few sources have taught me as much about the history of classic men’s style as James Sherwood’s book The London Cut: Savile Row Bespoke Tailoring. If you have not yet picked up a copy and learned the complex history of the scions of Scholte’s “limp look” or how Cary Grant’s most elegant silhouette was carefully crafted at Number 8, you are missing out.

Mr. Sherwood provides a detailed history of each of the tailoring houses on Savile Row (and quite a few who although not located on the row itself, are of the same quality and spirit) along with information on where each house seems to be going, who some notable customers were/are, and what distinguishes each house from its neighbors in cut and ethos. Additionally, the book contains pictures of famous clients sporting their Savile Row finery, from the Royal Family to Bunny Roger and Fred Astaire to The Joker (incidentally, one of Tommy Nutter’s last projects before his untimely death in 1992).

The book’s creation is even a product of the tailoring itself. Mr. Sherwood was asked by Pitti Immagine Uomo in 2006 to bring together a grand exhibition of Savile Row tailoring at the January 2007 biannual gathering in Florence. By the time the exhibition was being assembled at the Palazzo Pitti, the seeds for a book to accompany and compliment the exhibition had been sown, and The London Cut was published the same month as its namesake exhibition debuted. Although the miraculous book and exhibition were put together in a remarkably short timeframe, judging from his history, it is no shock that Mr. Sherwood would be the one to put Savile Row back in the spotlight in such a dramatic way.

I am quite fortunate to have met James on more than one occasion, and he was kind enough to speak with me recently about his personal experiences on Savile Row, what captivates him about The Row, and what we can expect to see next. Although he had his first walk down Savile Row at sixteen, and was more than a bit intimidated and awestruck, Mr. Sherwood was truly bit by the Savile Row bug in 2003 after having his first bespoke morning tails cut at Ede & Ravenscroft for his appearance on the BBC during Royal Ascot. Before this, he had slowly been easing into the idea of Savile Row through the tailors he refers to as the “New Establishment” in The London Cut (Ozwald Boateng, Richard James, etc.), after a decade reporting on the seasonal runway circuit.

The thing that Mr. Sherwood most enjoys about bespoke is the personal, artisan experience on Savile Row, and by the time The London Cut was being written, the time seemed right for a larger audience to be brought onboard. “We were all getting bored by gross luxury and the idea that if a designer slaps his name on a piece of ready to wear made in multiples and sold worldwide that it could be considered special and precious,” James told me. For him, “Savile Row answered all the questions contemporary men were asking: give me something unique, give me something that demonstrates centuries of craft, give me something with few carbon foot prints and much longevity.”

Lastly, once you have read The London Cut, don’t despair, there is more to come. Mr. Sherwood intended The London Cut as “an introduction to contemporary Savile Row and a brief history of the heritage houses. The pictures were of secondary importance to putting across the information.” Coming this October from Mr. Sherwood will be Savile Row: The Master Tailors of British Bespoke, a “glamorous publication showcasing over two centuries of the world’s most influential and well dressed men and women as dressed by British bespoke tailors.” My friends and family should consider this an official notice: if it’s October, I’m busy reading.