The Other Retro Luggage Brands 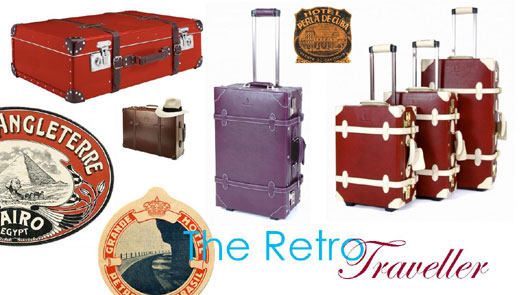 “Oh what’s it called?” the man asks smiling, turning to his Vogue reading wife as they stand somewhat disconsolately awaiting their luggage on the carousel, seeing a bright red case with brown leather straps and corner caps – the veritable sore thumb of modern luggage – drift past. They were sure they’d seen the name somewhere; horses came into mind for some reason. “You know darling, everyone’s got one. Kate Moss, Sophie Dahl. Even the Queen. Something about trotting.?” Although this couple, seemingly well acquainted with such vaunted, marketed and yet strangely obscure brands may be correct, that this elegant crimson retro case is manufactured by the esteemed Mayfair based brand Globe Trotter, they may very well be wrong.

If you were looking for colonial luggage, your thoughts would naturally stray to the self-consciously retrospective emporiums in the environs of Piccadilly; the sort of places that have polo sticks and pith helmets in the window displays. London, formerly the colonial capital of the mighty British Empire, is a predictable starting point to purchase the luggage of Churchill and Maugham and Globe Trotter is, rightly, at the top of this list. It has the pedigree and the patented technology – as well as the world famous and much admired aesthetic.

However, though it is light, strong and airport friendly, some balk at paying such high prices for ‘papier mache’ cases. When a friend of mine looked over some of the cases in Harrods he asked, incredulous; “Isn’t it even leather?” Indeed it is not, for Globe Trotter believe leather is impractical and adds unnecessary weight. Upper Case on the other hand (www.uppercaseonline.co.uk) considers that “leather delivers a sense of indulgence and luxury that no other material surpasses.”

Established a mere 5 years ago, Upper Case is one of those curious brands that seem to have been born of a frustration with the declining aesthetics of the modern world. “Our vision” they explain “was to bring back the elegance and luxury of travel from years gone by.” It used to be available in Fortnum & Mason and I had the privilege to examine it a few years ago. Though not as heavy as you would imagine, it is certainly not as light as Globe Trotter; a decent size suitcase comes in at 6.3kg. Their ‘Sophisticated’ model is well made, attractively lined and, like Globe Trotter, will age well – cases like these always look better after a few journeys. In addition, there are 10 colour combinations and, crucially, an Upper Case can be yours for less than a Globe Trotter although the largest case offered is only 68cm in length – the biggest Globe Trotter is 83cm.

We now leave London for Stockholm and Alstermo Bruk (www.alstermobruk.com), a 200 year old Swedish luggage maker who have been offering their Globe Trotter-alike ‘Atlas’ model for over 100 years. Unlike Upper Case, Bruk has a pedigree similar to Globe Trotter. Wood framed, with its own registered AMO Fiber, Bruk is easily mistaken for Globe Trotter. However, unlike the British brand, Bruk throws in the attractive leather strapping for free and the cases are wider and also slightly cheaper. Though not stocked outside Sweden, they are available to purchase online in a range of tasteful colours.