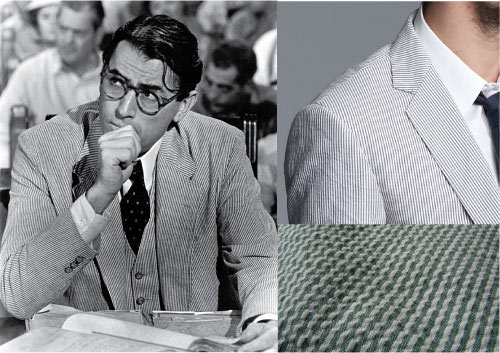 Seersucker. Now, I always assumed that it was an America-born-and-bred kind of fabric, but in fact seersucker’s history in the Western world began – as a lot of men’s fashion did – with the British Empire’s pasty colonists, who were taken by the fabric’s ability to keep them cool in far-flung tropical locations. When seersucker eventually arrived in the United States it found a natural home in the South. Gents there who were looking for a lighter, more breathable material for their suits loved it, and it soon became a summer wardrobe staple.

The introduction and widespread use of air conditioning in the South changed seersucker from an everyday cloth to an eccentricity, which was a great shame. Men not only lost a great sartorial tradition, they also lost touch with the seasons. Admittedly there have been attempts to resurrect it, but many have been half arsed at best. In the mid-nineties Trent Lott initiated Seersucker Thursday in the US Senate to show that it wasn’t “just a bunch of dour folks wearing dark suits and … red or blue ties”. This, I imagine, proved about as successful in convincing the public that politicians were “fun” as the King Herod Daycare Centre was at attracting parents. And just one Thursday a year? It’s hardly pushing the notion of seersucker as a practical alternative to wool suits, is it?

Outside North America seersucker is an even rarer beast. This is understandable in Britain, where summer is often biennial and fleeting, but it’s a shame that it’s not more prevalent on the streets of Tokyo, Singapore or Sydney. In these places it’s all too common to see dark-suited gents traversing the scorching landscape between air-conditioned buildings like vast earthworms crossing a patio.

But it doesn’t need to be this way. Seersucker suits these days are often tailored to contemporary lines and, in my opinion, look far more appropriate in hot climates than dark wool-based suits do. Off-the-rack seersucker suits may not always be readily available in your neck of the woods, but local tailors should be able to source some fabric and make one for you. You’ll find that, thanks to their barely-lined structure and lower material costs, they’ll be a fair bit cheaper to make than most bespoke wool suits.

If you can’t find a tailor in your area who can make a seersucker suit you should give one of the many online Hong Kong-based tailors – like Indochino or MyTailor – a whirl. Results may vary, so you’ll probably want to consult the oracles at StyleForum.net before deciding. (For the record, I ordered a bespoke shirt from MyTailor and was happy with the results, but have yet to try ordering a suit from either it or Indochino.)