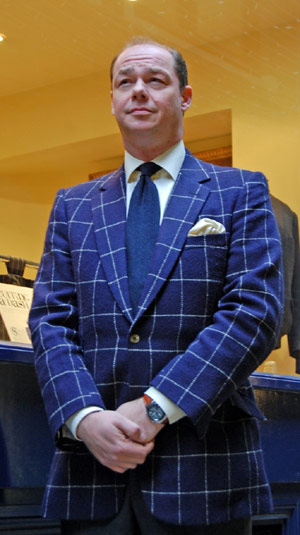 Last week I wrote in praise of the City tailor; that modest, unassuming artisan of the Square Mile, perfectly placed to attract a lunchtime client but imperfectly represented to capture the imagination in the manner of Savile Row. This week, I interviewed a man who bestrides these two worlds.

With over 25 years of bespoke tailoring experience in the City and on the Row, Richard Wainwright is a man immune to mystique; to him, a good product is a good product, irrespective of postcode.

I met him at his computer, an unfamiliar tool for a tailor but a necessity for a businessman, where he was performing the common but exasperating task of perfecting an Excel spreadsheet. As far as machinery goes, this seems to be as much contact as Richard would care to encounter: his new venture, with his business partner Paul Wilkinson, is all about the human touch. “I was fed up sitting in a huge showroom waiting for people to come in” he begins enthusiastically, telling me about the endeavour, Choppin & Lodge, which offers fully bespoke hand-made suits with a visiting service.

The goal of Choppin & Lodge is to offer ‘proper bespoke’ for a mere £120 more than ‘pretend bespoke.’  “No one’s doing what we’re doing” states Richard “because the majority of visiting tailors machine-make their products.” Starting at £695, Choppin & Lodge suits take six weeks on average and are worked on by a team of four tailors with a combined 75 years of bespoke tailoring experience. Are no corners being cut at all? No compromises? “None. No glue, no cheating!”

Having worked for Huntsman, Gieves & Hawkes and Chester Barrie, Richard has known the secrets of Savile Row for many years. Does he think that the Row’s prices are justified? As a tailor who knows both worlds? “The rents are astronomical – you have to price according to address.” And is it the aim of Choppin & Lodge to compete with that famous street’s much vaunted names? “Our competition” states Richard, candidly “is anyone that sells a quality suit.” Richard’s experience and skill has yielded good custom over the years and his services have been patronised by the great and the good.

Choppin & Lodge are tailors with ambition and a passion for tailoring. “We have a love of clothes” Richard smiles “a real love of clothes – and people.” C&L are determined to provide the right suit for each client and not simply copy and paste a house-style on all and sundry. Imaginations are also embraced and the avenues of invention and individuality open for exploration. “That” says Richard “is what bespoke tailoring is all about.”