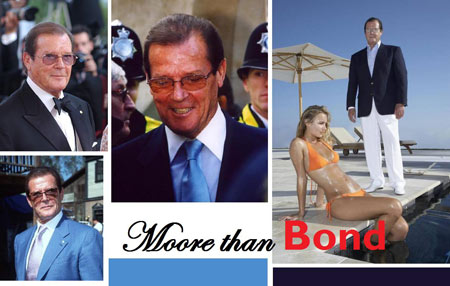 I have always been intrigued by the stories of artists who rest very easily on a previous period of titanic greatness; musicians who write that one great album and then escape to a beach house on St Barts; novelists who churn out the ‘most important book of the age’ and then disappear, quite intentionally, to live out the remainder of their life in quiet contentment. In many ways, I fancy it is because we expect too much regularity from our artists; we work and push them to work in the same way but theirs is a strange world. In many ways, artistic work can be understood by imagining that creativity has a limit; what lurks in the imagination of an artist can be surprisingly small. So small in fact that revealing the quantity can lead to others exclaiming; “Is that it?”

I chanced upon an interview with Roger Moore in the Daily Telegraph where the actor and UNICEF ambassador was being asked about his book ‘My Word Is Bond.’ While certainly a good deal older than most will remember him, as the eponymous spy in the 1970s and early 1980s James Bond films, he still defends the concept of ‘mental youth’; that the mind does not age, only the body. He also defends his light-hearted portrayal of Bond with a suggestion that the supposed ‘spy’ is actually scripted very unlike any spy would ever be; “who turns up in bars and hotels around the world and everyone says ‘Ah, Mr Bond. We’ve been expecting you.’” Normally, the interviews at this level are gushing and blushing; bouts of obsequious comments and over generous praise, however this was a rather tame affair. So tame in its fawning stamp in fact that criticisms, and there were a few, stood out rather strongly.

One criticism was that Mr Moore dressed ‘rather ridiculously.’ My eyes rolled at the suggestion; here was a man approaching old age rather graciously, who does not seem to take himself too seriously. While his dress sense is certainly classic, almost textbook regal, it is far from ridiculous. Why should smart jackets and carefully woven ties, not to mention excellent colour understanding and coordination, be considered so on a healthy old gentleman? Moore, in my opinion, rightly eschews the casual carelessness of actors in his generation who are happy to be ordinary, even over-the-hill, in terms of dress. Not for him the tired dishevelled ‘No one cares about me anymore anyway’ self-pitying (or loathing in some cases); Moore, despite having a rather humorous view of himself, actually considers that self-presentation should not wither with age.  He is, for some tastes, perhaps a little brash (French collars and cuffs and large shiny silk ties) but he dresses for the occasion rather perfectly and his jovial, winking smile as his ally, looks all the more youthful for his consideration.

Although it was remarked that Mr Moore dresses ‘like Bond’, I would in fact suggest almost the opposite. Aside from his immaculate black tie ensembles, Moore’s wardrobe leans more toward the archetypal Bond enemy; the sort who owns pet crocodiles, gigantic yachts and cavorts carelessly with young attractive women. The large collection of sunglasses, in an interesting array of tints, lend something of a continental finish to a very English Englishman; putting one in mind of the late Yves Saint Laurent. He is marvellously self-deprecating, referring to the royalty cheques for his Bond work which still flow steadily in through the door of the Moore household; his professional life after Bond, which he exited in his late fifties, was not exactly firing on all cylinders. There must have been offers, which makes one wonder whether he always did want to be remembered as the man who replaced Sean Connery; or whether, the Moore ambition and artistic ejection complete, he more or less retired to his current life; official ambassador for UNICEF, unofficial ambassador for well dressed gentlemen everywhere.