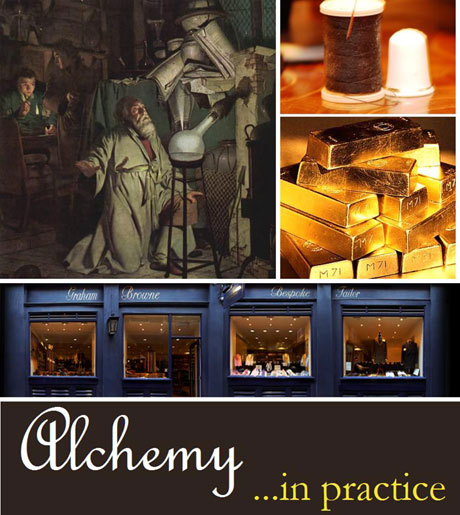 Many moons ago I wrote, somewhat verbosely, of my admiration for style resourcefulness and sartorial alchemy. I am continually impressed by the unpolished gems that some style gurus manage to find in unlikely places; at the bottom of bargain boxes, in a charity shop, on eBay, in their parents attic. Wherever there is value, you will find them. They are extraordinarily patient people who think nothing of spending hours in underground thrift stores with a rather brave hope that they will find something worthwhile. I know a gentleman who trawled through boxes, pushed through crowds and endured hours of disappointed searching in stuffy, poorly kept second-hand emporia only to return to the same search a week later.

Such persistence and tolerance of imperfection deserves praise, but what really amazes me is how a little smattering of imagination can turn the wrinkled garment in the bargain bin into a stand-out piece in an ensemble; one which will prompt continual enquiries of ‘where did you get that?’ I recently took a very cheap, new double-breasted jacket bought on eBay for £5 (including delivery) to Graham Browne in the City to see what they could do with it. I informed the tailor, Russell, of my plans to turn what was an unremarkable and anonymous jacket into an attractive and distinctive item. I would add the creamy white buttons, to create a natty Gatsby-esque number, but his job was to do what he could with the fit.

Armed with pins, Russell asked me to put the jacket on. It was a 34”, as close to my torso measurements as possible, but still depressingly boxy. I had already decided that the jacket waist and shoulders needed to be taken in, and I had pinned the bottom of the jacket up myself in order to give the tailor an idea of how I wanted the item to look. Russell was utterly professional and only assented to chime in with commentary on the very cheaply produced garment in response to my own criticisms of its quality. I informed him of my goal of sartorial alchemy and that it was truly up to his talents as a tailor to make the silhouette of the jacket worthy of gold; “So, I’ve got to make a silk purse…” he began “…out of a sow’s ear!”

The lesson of this will be, hopefully, that despite its rather dull origins, an item should not just be appreciated for what it is, but for what it can be. If you have an unspectacular item that once cost you an insignificant amount of money, you have a choice; with the right imagination and adjustments, you could turn something you might have thrown away into something rather special. The raw materials of even the cheapest, nastiest object of fashion need to be appreciated. For fashion, after all, is merely material that is sewn around the human form. A little patience, and imagination, goes a long way. I hope to see the result of Russell’s alchemy next week when the jacket is ready.