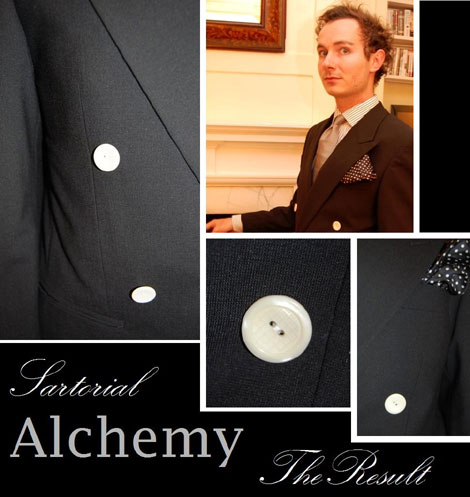 I looked forward to my return visit to Graham Browne not only because I had given them the opportunity to take part in my alchemic experimentation but because I was eager to see the results of their tailoring; I was hoping to find what I had imagined in my mind’s eye. Should the results of my first use of their services be to my liking I would gladly commission further garments in confidence that they will be dealt with properly.

As well as the extraordinarily cheap-but-not-so-cheerful black double breasted jacket, I had also entrusted a disused Cordings covert coat. It was one of those hopeful parental purchases i.e. “You’ll just grow into it!” that I had ceased to wear. It was this garment that Russell first handed to me to try. From the oversized cape-like coat I remembered, it felt instantly different; tighter in all the right places, shoulders the correct width. No longer was I a boy in what appeared to be his father’s coat. The silhouette of the coat was far more pleasing. Russell nodded approvingly as we moved to the more tongue-in-cheek issue of the double breasted jacket.

The operations performed on the jacket needed to be rather subtle; if you cut a double-breasted jacket too shortly, you not only ruin the proportions of the jacket in relation to the position of the buttons but you also make the pockets look cartoonishly small. Not being particularly tall, I prefer jackets of standard length to be cut a little shorter and Russell had snipped the right amount from the length to retain the proportions. Russell had also been cautious, but correctly so, in his nipping of the waist – I wanted it to be really tight to my torso but to do so might have caused the material across the jacket to crumple unattractively. The only thing I may still do, as far as the fit is concerned, is reduce the width of the shoulders as they are still ever so slightly broad for my frame. However, this is a very minor point. Overall, I was very satisfied with the alterations. Russell was remarkably modest about his work and credited himself with no ‘alchemic’ transformation. The most he said for his work was that the jacket was ‘probably a bit better.’

I decided to add the cream buttons myself as I am always looking to practice my sewing skills. Being able to perform such basic needle work is very important for gentlemen that have creativity and alteration in mind – my nearest tailor charges £1.50 a button. I wore the item out the next day to test the fit properly and also to gauge the reactions on the garment’s aesthetics. 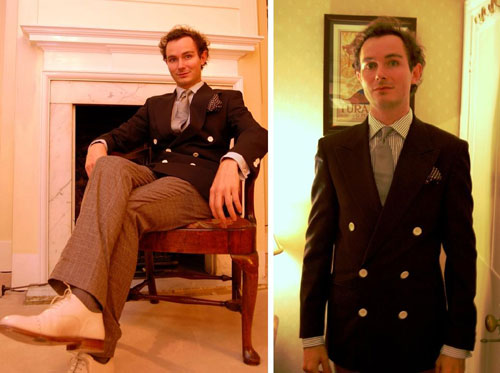 When sat down, I could comfortably wear the jacket buttoned up. It had lost the pre-alteration boxyness and felt tighter. The comments on the aesthetics said more about my peculiar taste than Russell’s work – they ranged from ‘You look like a pilot!’ to ‘The buttons are…quite striking’ – but overall, when I checked myself in reflections throughout the day, I felt far more comfortable and pleased with the jacket. When I bought it from eBay, I had laughed when I first tried it on; it was dull, boxy and unflattering. I hid it away for months and months like a figurative ‘sartorial-skeleton-in-the-cupboard.’ Now, though not exactly the gilt-edged garment I had envisaged, I have an interesting, becoming and well-fitting item that I am happy to wear.