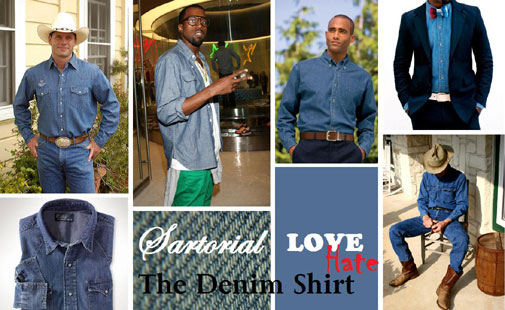 The introduction of denim into our wardrobes was, make no mistake, a revolution. What was once an unremarkable fabric for the working class became a sought after fashion fabric that conquered the globe; denim was to the late twentieth century what Huddersfield cotton was to the 19th. Tough, hard-wearing and distinctively American, jeans particularly are the greatest reason for this material’s success. They were an American teenage trend in the mid 20th century, and by the end of that century, everyone was wearing them.

Indeed, it’s difficult to imagine life without denim jeans. They are such practical inventions of fashion – easily washed, tough and durable – that it seems our current mode of life, far more active and requiring ever more resilient clothing of the ‘wash-and-go’ variety, might not exist without them. Cotton and wool trousers are often too smart, and often too easily spoiled; I remember spilling cream on a pair of virgin wool trousers and making the mistake of rubbing away at the material vigorously, as I would on my jeans. The difference is that the jeans can take it.

Of course, there are scattered detractors of denim. Dandy ‘evangelists’ for example tend to hold denim in contempt writing that “…this age of stonewashed blue jeans and practicality through the T-shirt is not the age in which a Dandy can come to aristocratic fruition.” They maintain a genuine refusal to acknowledge “…anyone who wears…jeans to be a dandy of any stripe.” Lapo Elkann admirers will probably disagree. The workaday value of denim is doubtless the problem for such critics. Perhaps unsurprisingly, this is the very value – something Yves Saint Laurent applauded – that explains their extraordinary success.

Aesthetically, they can be simple, even elegantly so. The material itself, no silk or velvet, is perhaps not the most lustrous or gorgeous of fabrics but pants rarely ever were the most glorious part of an ensemble. It is because of, and not in spite of, their supposedly ‘crude’ adaptability and relative simplicity that jeans, whether the detractors like it or not, are wildly popular and it seems, here to stay.

Other items of the denim family will look on in jealousy at the meteoric rise of the prodigal ‘denim jeans’; dungarees, though practical, are the old pretenders; the denim jacket is like a distant relative who uses the shine of the family name, so lacking in aesthetic and practical value is the product itself. The denim shirt, for some, is even worse. A friend once told me that while he adored denim jeans, he abhorred denim shirts; “They’re so ‘Me too!’ – what is the point in a denim shirt?” Not armed with a reason except the predictable and natural explanation that perhaps some people rather like them, I have often pondered the sartorial love/hate reception that meets the denim shirt. I myself rather like denim shirts.

Usually manufactured from a softer denim than jeans, they have a character and comfort all of their own. However, they are often very badly done in a manner that doesn’t suggest Fifties teenagers, milkshakes and Chevy-packed parking lots but beer guts, Stetsons and all-you-can-eat steakhouses. Denim should not be worn with denim – everything that ‘matches’ isn’t always a perfect ‘fit.’ Just ask Liza Minnelli and David Gest.

And while it is certainly true that the denim shirt is principally a casual item of clothing, it should not be treated in a slovenly manner. Denim shirts are boyish and as such, should be worn in a more fitted style. Baggy denim shirts, with clownishly voluminous arms, however comfortable they are, will make you look like a prisoner.

It is best to avoid overly ‘washed’ denim shirts. For one thing, indigo is a wonderful colour that should be displayed proudly and be allowed to age steadily. Secondly, there is something indescribably nasty about a denim shirt that seems to masquerade as an ordinary mid-blue cotton.

The context in which denim shirts are worn is rather unfortunate too. In their most popular habitat – the line-dancin’, country music luvin’ bone suckin’ states of the US of A – they seem to be predictably paired with denim, boots, and other items of rugged practicality. They could be better worn, as an item of intriguing colour and texture, with a club stripe tie, sports jacket, casual trousers and loafers to a booth at the 21 Club.