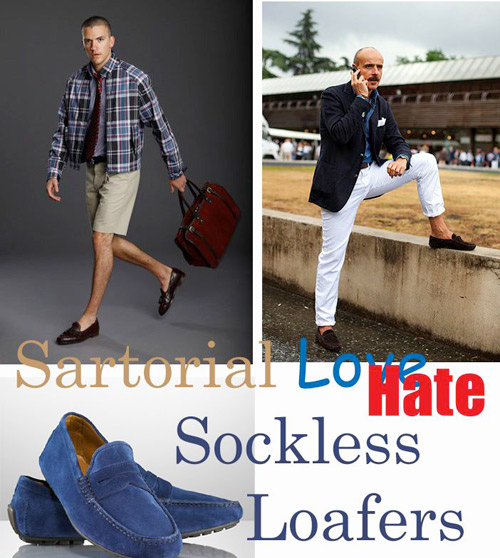 One of the most interesting criticisms I received recently was that my practice of wearing loafers without socks was nothing short of “disgusting.” The most amusing point about the delivery was that it was delivered by a friendly gaggle of females who thought nothing of imparting such a critique whilst slipping their own uncovered heels in and out of their ballet pumps.

“You should wear socks” one of them nodded, patronisingly “otherwise your shoes will stink.” Further remarks of surprise came from male acquaintances; “Ooh, and no socks either. Looks very…” “Continental?” I ventured, hopefully. “Yea, I suppose so” came the uncertain reply.

England is a prudish nation. As many polls as there are stating that we are the ‘naughtiest’ nation, the ‘most fetishistic’ or ‘the most adventurous’, we still have reservations when it comes to the unexpected exposure of flesh. Though the strict Victorian standards no longer apply – hems are higher, necklines are lower – we still find flesh curious and even offensive, particularly in relation to footwear: along with the American race, we must be the only nation who believes that the ideal summer ensemble involves wrapping our feet in thick socks and chunky trainers.

Continental Europeans are far more comfortable lolling around sans-socks when it gets warm. I recently admired a louche duo of Italians having a coffee in the shade at Cecconi’s in Mayfair wearing Ray-Bans, linen jackets, chinos and sockless loafers. The look was easy and comfortable; I wander on a hundred yards and encounter an Englishman in socks and sandals. No doubt the Englishman will scoff at the Italian, decrying the sweaty decay of his footwear; the undignified and un-English exposure of ankles; the unsightly and ungentlemanly act of ‘forcing’ his most inelegant bodily feature on the rest of us, in much the same way as my female acquaintances criticised my sockless state.

The worst trait of the British in this critique is that they deny the self-benefit of forbidding the practice and suggest it is for the benefit of the wearer; “But your shoes will smell” they cry, “think of it – sweaty, salty shoes. So disgusting…” “…and uncomfortable…” When comforting critics with assurances that they will never be forced to smell the shoes, this yields little change in their tolerance. It is not perhaps the decay and odour itself as the thought of it, the idea of such an improper act that they really object to.

Harsher critics might even suggest the problem of Britishness itself is to blame; stiff upper lips, repressed sexuality and a hatred of ankles, although there seems to be little objection from anyone, including myself, on the female practice of wearing shoes with unstockinged feet.