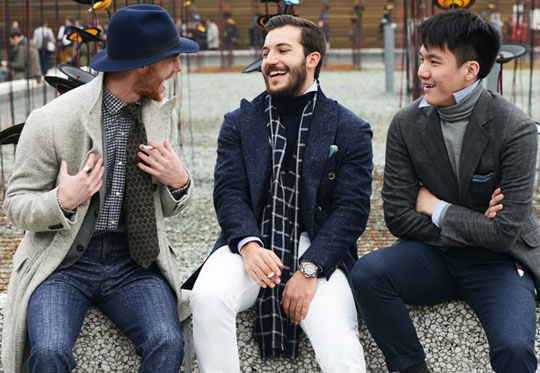 “Erm, why are those dudes wearing shirts?”

Ah Pitti. You can always rely on it to start a new fad. There were the slightly peasant like floppy hats (which even ended up in Zara) the tie back-blading (which many found obnoxious to the point of attempted strangulation) and now we have this – the collar popped turtle…thingy.

With persistently low temperatures in Europe’s late winter, there’s no doubting the necessity of wearing cosy knitwear. Sartorial radiators are an essential part of a strong winter wardrobe and, however much the turtle neck divides opinion, it is a solid staple that acts as both jumper and muffler. Unlike the crew or V-neck, it has a complete presence of its own, requiring no shirt as a formal base and looks more at home, particularly in fine, cashmere versions, with the likes of a tweed jacket, flannel blazer or even a barathea dinner jacket.

However, the turtle neck is also perceived to be rather boring, relatively prudish and utilitarian. “Sexiness” a friend observed “is pretty hard to convey through a turtle neck. It’s like wearing a nun’s habit, or a fisherman’s Sou’wester.” I would agree to an extent, but would suggest that’s where the sensuality of a velvet blazer and a paisley silk puff can lend a helping hand.

The question is, can a shirt collar achieve the same effect? After all, it cannot be that warmth is the target for the practice of popping a shirt collar above a turtle neck.

“Contrived” a friend commented “and just pointless. What is that tiny triangle giving them?”

“I like it” grinned a girl after icily admiring a picture of a Pitti regular for a full thirty seconds. “It looks cool, like a naughty school boy or something. He looks like he’s got some formality, but he’s using the jumper to stay warm…and that means he has forgotten what he’s wearing and what he looks like – that’s sexy.”

Has he forgotten? I find that rather hard to believe, particularly as the shirt collar is so prominently proud of the top of the turtle neck. My own theory is that the look is aping that of a Regency buck’s neckwear; where a cotton tie is wrapped around a collar, the tips of which kissed the bottom of the wearer’s chin. It might be marginally warmer, but, like most fads at Pitti, it’s not being done for practical reasons.