Sartorial Love/Hate: Back Blading a Tie 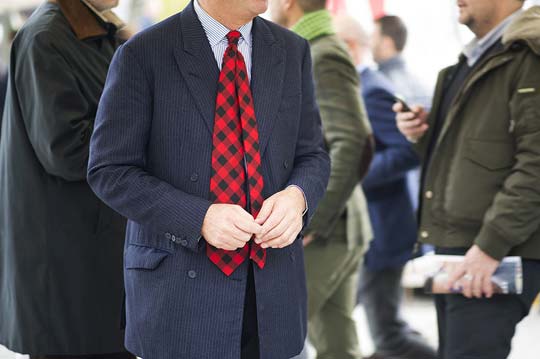 When my father taught me to tie my tie, I remember how he would fiddle with my meagre attempts; shaping the knot, positioning it in the exact centre of the collar, standing back to inspect. I was a rather impetuous little scamp in my youth and did not sufficiently appreciate the lesson he was providing, the result of which is that I have not altered my method of tying ties since childhood; a simple four-in-hand with as small a knot as possible.

My idea of ties is that they should be artistic but precise. A bright, patterned strip of material hanging down from the neck sounds like something wild and bohemian, but it actually represents the ultimate in formality in today’s dressed down world. For years, the tie has been tied by everyone (differences in knots aside) in much the same way; the back blade is concealed behind the front blade by utilising the ‘keeper’ – a loop of material that secures it in place. However, there is a curious fashion developing for displaying the back blade of the tie. And, like many fashions, it has an army of critics – and a cabal of supporters. Some call it contrived, others – interestingly, usually those who can’t speak a word of Italian – call it sprezzatura.

Sprezzatura, or ‘sprezz’ as the iCrowd now efficiently refer to it, has become somewhat of an excuse, rather than a reason, for much of the Tumblr-originated fashions that now dominate elite menswear. If something looks messy, it’s just sprezzy; if something looks out of place, it’s sprezzatura, which means it’s in place. It is this kind of ‘heads I win, tails you lose’ reasoning that so infuriates the Hercule Poirot-esque perfectionist crowd who lambast the Pitti-inspired taste for contrived imperfection.

“What on earth are they doing with their tie?” they cry, as the back blade flutters in the wind, as though they were an errant schoolboy snapped on their way to a chiding from the housemaster. “It looks so contrived” they sneer “the rest of the outfit is perfectly tailored and his hair is absurdly groomed but, for some reason, his tie just happens to be out of place?” As a point of consistency, it is a fair one.

However, the fans also have a point. “It’s not contrived” they say, confidently “the tie is an expression of artistry in an outfit; it doesn’t have to be perfect.” Again, a valid observation. To say that the back blade should never be seen, simply because there is a keeper tab sewn into every good tie is nonsense. Why, if we obeyed the implied instruction of all garments, we wouldn’t have any room for invention or creativity, and it is likely that aestheticism would suffer greatly.

I’m on the fence on this particular trend. I don’t think I will be adopting it any time soon, but it’s nice to see that there are some who are prepared to dabble and break convention and create argument. Doing sprezzatura for the sake of it is contrived; about that, there is no question. Affecting imperfection is still an affectation. However, there are some who have grown bored of the necktie in all it’s combed, tamed formality, and this method of wearing ties offers another, lest I say ‘creative’ approach to cravatting.