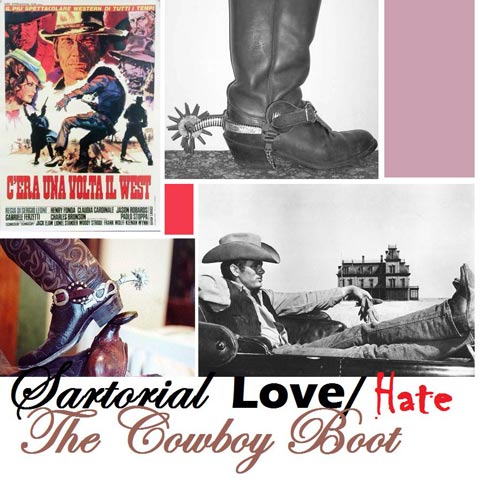 “Yee hah!” I think to myself when I see a pair of them, clicking around London’s cobbled streets; the pointed toes, robust and upturned, kicking into the cold English air. The wearer’s jeans conceal all except the foot but even then, their distinctive shape and unmistakable click give the game away; some look on in admiration, some hide chuckling faces of mockery and derision: the cowboy boot has admirers, but it also has enemies.

In the right environment, it would be daft to wear anything else; cowboy boots, I have been informed, are perfect for their required purpose. The attractive image of a rancher in a Stetson, checked shirt, blue denim and cowboy boots is timeless; and an image contemporary designers, such as DSquared, have partly plagiarised for their collections. Admittedly, this look owes a lot to Hollywood, particularly the popularity of personalities such as James Dean and Gary Cooper, who blazed across the broad cinema screen in dusty, cowboy clothing; the cowboy boots on their feet transformed from hick, Lonesville USA essentials into fashion items desired by many. Were it not for the motion picture Western, I doubt cowboy boots would be worn in the cold concrete towns of Eastern Europe; a tribute to the immense wonder of cinema.

I once tried a pair of cowboy boots in Texas, a state that seemed to me the home of the particular item, for they were worn everywhere; in the steak houses by smiling ol’ Texans in gingham shirts, by smartly dressed businessmen in downtown Dallas and by the ‘ladies who brunched’ at the glitziest hotels. Though the influence of European fashion is discernible in such a place, the stoic resistance and great Lone Star pride of their ranching past is more overt.

However, it is precisely this connection that has negative influence for those not Texan by birth. The cowboy boot is as alien to some Americans as the hot dog to a Moroccan; it’s part of a culture and a way of life that is somehow not their own.

The cowboy boot, with the distinctive angled heel, the pointed toes that make one’s feet seem trowel-like, and the rigid upturned profile, is to some a practical, even stylish item of footwear that recalls the glory of onscreen Westerns, the magic of the Wild West and the tough, unshaven masculinity of a bygone age. To others, the boot is graceless and entirely inappropriate for metropolitan wear.

When I walked around in the brightly lit emporium in Dallas that sold the pair, a large warehouse building that reeked of leather, testing my cowboy credentials in a very cowboy state, I realised that I was touching a fantasy; I could never have proper use for such footwear. I lack the languorous manliness essential to look appropriate. Even then, I would question the purchase for one such as myself. I don’t harbour hatred for them as some do, nor do I question their appropriateness and practicality in certain environments. It merely seems to me that the cowboy boot, rather like the state of Texas – delightful as it was – ‘‘ain’t for everyone.’’