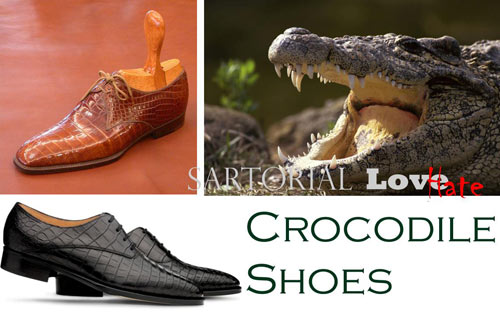 It is always an entertainment when I observe the reactions of my less sartorially inclined friends to the prices of bespoke and designer clothing. Their responses are usually a loud and rather alarming repetition of my answer, with an added note of incredulity, and, if the cost is severe, this is followed by another, louder repetition and sometimes a generous helping of expletives, eye-rolling and head-shaking.

One of my old friends – a man who is ill acquainted with clean underwear, let alone a top-stitched lapel – was stunned into uncharacteristic silence when I told him that if he wanted a bespoke suit for his wedding, it would cost him, at the very least, the better part of £1000.

When I told a friend that the pair of crocodile shoes in the shop window, at £1,100, were peanuts in comparison to the £3,000-4,000 they would cost bespoke, he started so suddenly and with such an apprehension of violence that I thought I would be thrown through the glass. “What the HELL?! Four THOUSAND pounds?! For a pair of SHOES?!” His astonishment, though sudden, was hardly unexpected. You are talking about, I informed him, the Krug of shoes; the Beluga of bespoke. A pair of rare, animal skin shoes that will last you years and will probably be the most comfortable thing you own. “They are really” I whispered, as we trundled on “the king of shoes.”

His opinion could not have been more contrary. Such a large sum of money was a ludicrous amount to spend on any shoes, but crocodile shoes were, to him, unattractive. “I can understand” he began, as he calmed himself “why those Berluti shoes were so expensive, they were like art, but those crocodile things?! They were awful!”

It did not take me long to establish that not even a price of £70 would persuade my friend to plump for the pleasure of wearing out a pair of crocs. The sheer cost of the raw material and the craftsmanship in creating the shoes was irrelevant; they were ugly and his snap judgment was that gentlemen only bought them to “show how much money they could spend.” I ventured that though this may be true for a number, there were many gentlemen who wanted the fascinating aesthetic of croc skin shoes, which was, unsurprisingly, met with derision.

“In any case” my friend concluded “it’s not exactly fair is it? Killing an animal like a crocodile for a pair of shoes.” This last point I did not venture to contradict; no matter where the skin is sourced, how the animal is killed, or whether the skin is simply a byproduct, many people will object to the killing of such an animal for the vanity of fashion.

I personally rather like crocodile skin shoes and not for the dubious ‘high status’ they afford the wearer, but because they have a unique character and exoticism that is unusual in footwear; a world in which a two-tone dye on calf skin is usually as ‘different’ as it gets. The legendary Francis Bown bought his bespoke crocodile shoes at Cleverley as it was “a question of beauty…these shoes constitute one blow against the scruffiness of the age.” And yet, to me, they do seem to have a slight scruffiness, a raw, animal, natural aesthetic that is quiet unlike the austere refinement of calf leather. It is probably this quality, as well as the extravagant price tag, that tends to divide observers into those who adore, and those who despise.