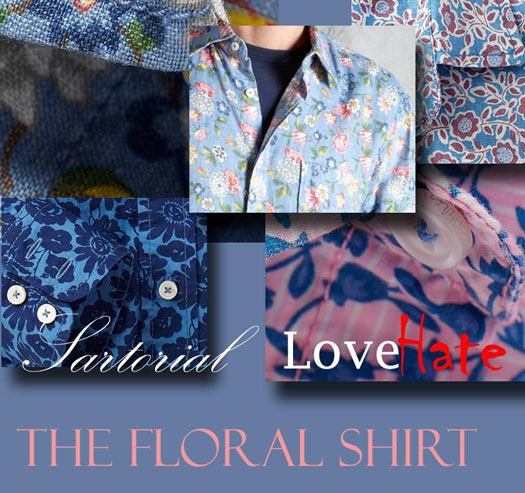 I imagine no one would be likely to accuse me of being a zany dresser. I like colours and patterns but most of what I like is not too far removed from the conservative. It should come as no surprise then that I am not at all partial to floral shirts. I do not mean the palm-tree calico prints, the crudely coloured Hawaiians; I am referring to the William Morris, Arts & Craft, Liberty-inspired, Boden-catalogue James May. The sort of print you expect on curtains and wallpaper, at the very most a modest house dress. Not the sort of thing you would expect for a gentleman’s shirt.

It has become the quintessential garment of the middle-class gastropub; a smattering of excessive ornament against the suede lampshades and the leather armchairs. The wearer, parked on a barstool with a basset hound at his feet, flips through the pages of a weekend supplement as a pint of Guinness rests on the bar. It is not an offensive image; the shirt itself is not ugly and it is not worn in a fashion that attempts contrivance. It is something about the concept of a shirt with so incongruous a pattern. Time and again I have attempted to envisage myself in one of these shirts – with a jacket, chinos and loafers – and each attempt results in failure.

It is not, I think, a traditionally male aversion to the floral; a man fond of buttonholes could scarcely be against the use of flowers. It is that alien, tablecloth-quality that isolates the garment which makes me feel uneasy, but it is probably that very quality which appeals to others; that sense that you are not wearing a midweek shirt of plain weave, stripes or check but a shirt that is a signature of a Sunday afternoon. There are, after all, gentlemen who loathe the working week and yearn for all that it is not; whatever the business you are in, a floral shirt is most certainly not the most appropriate choice.

Unsurprisingly, I have little idea on how it should be worn, although long straggly hair, a pair of moleskin jeans and some beaten-up deck shoes appear to be the most popular partners. The idea of tying a tie with such a shirt is incompatible with its purely ‘fun-time’ connotations; no one mans even the smartest of neighbourhood barbecues (‘It’s unsafe…and uncool’) wearing a necktie. It is an open-neck option only. Likewise, it should never be partnered with anything less alpha than a pint of bitter or, if the evening’s getting late, a neat scotch. Add twizzly umbrellas and fruit mixtures and you’re finished.