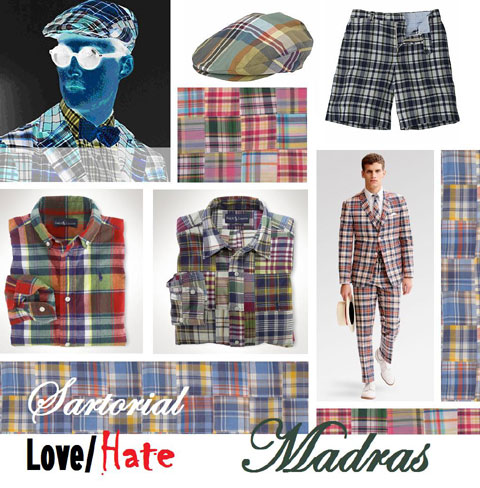 When I was walking around a smart branch of H&M recently, flicking through the deep rows of spring and summer jackets that possessed that particular, dense aroma of newness, my eye caught sight of a little picture of a bow tie; a rather incongruous but interesting little scribble with the clichéd but admirable words ‘Be brave. Be yourself.’ It seems H&M is not content in providing extraordinarily inexpensive clothing to budgeting gentlemen, it also coaches them in matters of confidence and experimentation. Bravery in dressing, and in particular the encouragement of experimentation, is something I plan to address more fully but the true subject of this article is a peculiarity of menswear that usually requires a hefty dose of bravery to attempt; a cloth of old, Indian origin that many see as the definitive pattern of spring and summer.

Madras cloth, named after the south-east coastal settlement in India (now renamed Chennai), has one of those interesting Anglo-Indian histories; like Mulligatawny, the Cummerbund and Pyjamas, it is a marriage of Indian creativity and colonial curiosity. The patchwork madras (the word ‘patch’ originates from the Indian word ‘pach’chadamu’) is perhaps the most interesting as it is an excellent example of thrift; offcuts of fabric were not thrown away but simply sewn together to contrive complete garments. This type of madras garment, now regularly manufactured for luxury brands like Ralph Lauren, is perhaps one of the more potent examples of why this cloth has some sighing in approbation, others sneering and frowning in detestation.

Madras is otherwise known as 60/40 cloth in India, which refers to the thread count; lengthwise 60, crosswise 40. This is apparently the perfect combination for producing cotton fabric of sufficient lightness to wear in heat, but also sufficient strength to endure the years of use. True madras cloth colours also ‘bled’ when washed, which resulted in a blending of the colours, but now, ‘modern’ madras is manufactured using stable dyes which means that the colours no longer run. It is frequently used for summer garments like shorts, short and long sleeved shirts, casual jackets and even hats, but remarkably the grander list is the list of formats the material once took before it fell out of favour; watch-straps, hat-bands, bow ties and waistcoats have all been made in madras, a fact which points more to the aesthetic value of the patterns and dyes than the usefulness of a lightweight fabric.

For many, the dizzying combination of asymmetrical plaid and riotous colour is all too much. The gentleman of minimalism, more interested in black and white linen, is surely likely to be baffled by the use of such a bizarre fabric but I believe the beauty of madras, much like paisley – another great Indian invention – depends on how much you use of it. For example, a madras jacket would in my opinion look very appealing if it was worn with a plain sky blue shirt, navy blue shorts and Sebagos; it would be a rather noisy ensemble if it was worn with garments of a competing pattern, or of too sedate a tone. The garment most men are likely to possess is a madras plaid shirt; I have some, my father and grandfather too – the question is, when and how to wear it? I happen to think that as established as they are, madras shirts are most definitely a sport-casual item and still rather eccentric; to wear them, one must affect complementary eccentricities, but in a controlled and dignified manner. A plain blue cotton tie, or a plain green bow tie with a madras shirt, beneath a blue blazer or a smart linen jacket.