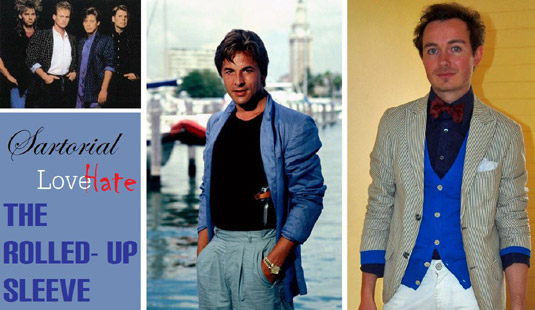 They were sniggering as I strolled up. The sort of mischievous, playground sniggering that does not befit men of the age of twenty seven. The darting glances as I approached, the little whispers; they looked me up and down, somewhat perturbed by my appearance. These were chaps (and chapettes) I knew well and yet they were reacting in a very particular way. After an embarrassing handshake or two, one of them blurted out; “Why are your jacket sleeves rolled up?” At this release of tension, the others exhaled with their comments; “Yea, isn’t that really eighties?”; “I thought you liked to wear smart things?”; “Rolled up sleeves looks a bit gay”; “If you’re hot, why do you wear a jacket at all?”

To be honest, I rarely roll up my jacket sleeves. I do so when I feel my look is edging towards a contradiction – formality with informality – to blur the lines and only, I hasten to add, when the weather is so decidedly undecided as it was when I encountered my friends; I do not go without a jacket because a sudden solar retreat and a chilly wind would make it very welcome. The other condition is that the jacket itself is not of too great a formality; a casual seersucker, linen or cotton. I would never, for example, roll up the sleeves of a brass buttoned blazer. For me, there is no issue with the aesthetic. Rolling up sleeves can add a functional charm to a jacket and it smoothes the hard edge of formality.

There are those however who consider rolled up jacket sleeves to be the worst example of affected Eurotrash and would like nothing better than to instruct every man who experiments thus to pull down or throw down. One of my friends hit upon one of the reasons for objection when he said that it reminded him of an Eighties visual. Hardly surprising considering that one of the greatest smash hits of that particular decade was the television series Miami Vice in which Don Johnson, a peerless icon of Eighties trash, wandered around the streets wearing sunglasses, an excruciating grin and the sleeves of his jacket pushed back to the elbows. Consequently, any rolling up of sleeves carries this association although we are fortunate in that the younger generation appear less interested in the product of the twentieth century’s eighth decade than we were.

The other objection, little to do with a seedy Floridan television character, is that rolling up sleeves on a jacket is bad for the jacket and an annoying contradiction; why ruin the jacket to create a look that doesn’t appear to make sense? Well, as I stated previously, when it comes to dressing correctly, weather is a (forgive me) grey area; on-off days can confuse the gentleman. Rolling up sleeves feels better than removing the jacket entirely and, particularly if you are layering, exposing a bit of skin to the air in the warm season is refreshing. I also happen to think that rolled up sleeves gives an artisanal, practical edge to a look that might otherwise appear too staid for a summer’s day.