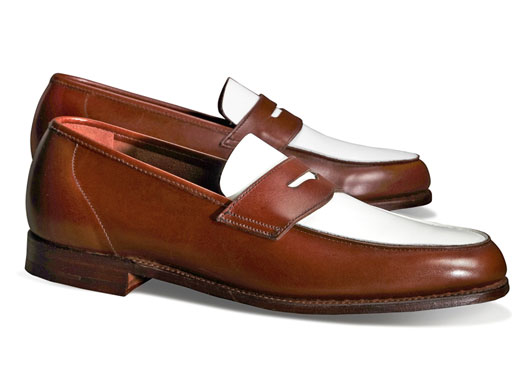 Spectators are to footwear what bow ties are to neckwear; eye-catching, theatrical, somewhat inappropriate for work and occasionally associated with clowns.

That’s a bit harsh. Not to mention hypocritical – I’m big fans of both.

However, neither are easy to pair in modern ensembles. Bow ties are jaunty and fun – but they need careful balancing, otherwise they can come off as comical.

And it’s the same with spectator shoes. Wear them with a dark suit and the contrast comes across as theatrical and extravagant, like a fancy dress Twenties gangster. However, wear them in summer with biscuit linen trousers, an open shirt and a hopsack blazer and the effect is much reduced.

However, a spectator loafer – distinct from a laced Wingtip or Oxford – is an entirely different prospect. Most often found in brown and white combinations, the two-tone loafer is, at once, an awkward mixture of twee associations and attractive retro design. In other words, a perfect candidate for sartorial love/hate.

The spectator loafer’s most common design is that of a penny loafer with a tan upper and a white or cream vamp. This makes them far more practical than laced spectators, which utilize a greater expanse of the paler, less dirt-friendly colours throughout the upper.

The other advantage of the spectator loafer in this regard is that it makes the two-tone design less bitty, smoother and simpler. As a loafer, the design is also attractive with formal, semi formal and casual trousers – tapered with no break – although is arguably a little too Rockabilly-swing-dancer with a suit.

However, there is a downside to the design. And it is generally to be found lurking at the back of weekend newspaper supplements, alongside the adverts for stairlifts, picnic blankets and home security blinds.

The problem is that the design has been appropriated by soft-comfort, orthopedic shoe companies selling slipper-like designs to Algarve golfing retirees. Though you might see it on a dapper Leo DiCaprio in The Great Gatsby, you’re also likely to see a cushion-collar version paired with beige socks tootling along in a mobility vehicle.

The most attractive pairs I have seen recently are from Brooks Brothers (made by Peal & Co – featured as part of the Gatsby collection) and Ferragamo. Ralph Lauren has also often offered a spectator loafer design. However, it’s best to keep it simple and stick with the penny loafer; tasseled multi-tone shoes are somewhat outrageous.