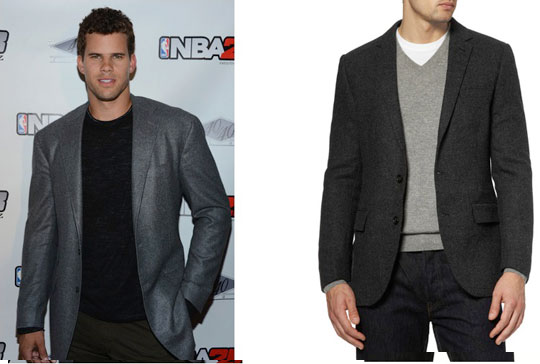 “Eurgh” my friend said, with audible disgust; “I really don’t care for that whole look. Tries to be stylish but it’s just lazy.” The object of his disapproval was a middle-aged man, greying at the temples, dressed in a charcoal merino wool crew neck, light grey velvet blazer and slim black jeans. It was a look so inoffensive that I was somewhat taken aback by the strength of his disapproval. Surely such consternation was unmerited for so mild a sartorial statement?

“Why do people insist on wearing blazers without shirts? It looks terribly pretentious. When you’re trying to say ‘you don’t care’ you’re actually saying ‘I care rather a lot’, it’s a failed statement.” His point, as I understand it, is that contriving the blazer to be the partner of a simple crew neck, without the ‘dignity’ of a collar, is a contrivance too far.

Another acquaintance of mine swears by the combination. Although he is rarely seen in a shirt, he nevertheless loves the cut of a blazer and favours wearing merino jumpers underneath in the colder months and t-shirts in the summer.

It isn’t an aesthetic I crave but it is certainly respectable by modern standards. Going collarless is becoming the norm rather than the exception. The open collared shirt, once an overtly casual state of dress, is now ‘dressing up’, anyone who chooses to wear a collar under a jumper is often asked whether they are “going somewhere special” and wearing a collar with a blazer out of London is perceived to be the very apogee of modern formality.

For those against the idea, the combination itself is the reason; as a cocktail drinker might respect the ingredidents but abhor the concoction. “It doesn’t work” they cry “the blazer is designed to be worn with a collared shirt.” Whilst it is true that the two garments combine aesthetics from entirely different sartorial backgrounds, this is also true of denim, which has overcome its workman past to be ‘acceptable’ attire in most of Londons grandest hotels.

For me, the “Collarless Underblazer” is but another example of the evolution of menswear, of the topsy-turvy journey a garment takes across the years; the valley of lowly years, the peaks of ‘fashion’, the plains of respectability. A crew neck worn without a collar is a sailor’s garment; a blazer is equestrian in origin. They were never intended, and many disapprove their union. However, this is marriage a la mode. Purists and traditionalists will always rail against these untidy, asymmetrical alliances developed and supported by the impetuous and the revolutionary.