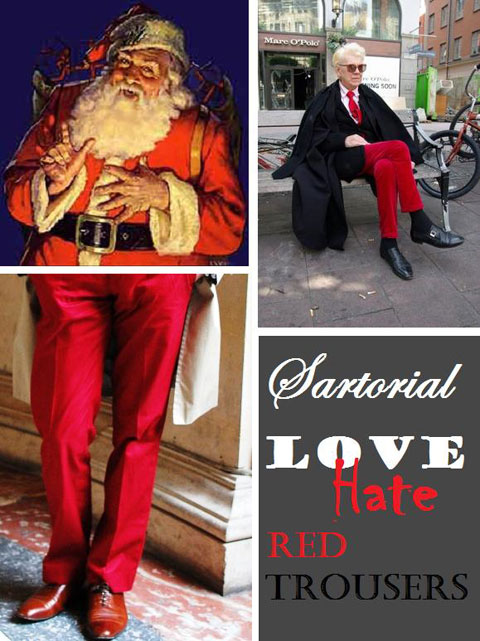 “Oooh! Seasonal!” they cooed on a frosty December morning in the office. Despite the fact that I was wearing about five or six items that could be labelled as ‘seasonal’ – including a sensible scarf and a warm hat – it was somehow predictable that my colleagues eyes should be drawn to my Santa-red trousers that poked out from the hem of my checked overcoat. Further comments about St Nicholas, grimly expected and consequently lacking in any hilarity, ensued with the more polite of the dissenters explaining in a painfully sympathetic way that my trousers were ‘rather bright.’

I turned a corner and suddenly the condemnation ceased; “I love your trousers!” shrilled someone excitedly, another walked past grinning “They’re so fun. I wish I could wear something like that.” The wheels in the head whirred, thoughts and ideas fizzed around my little grey cells as I realised, encouraging a knowing smile to my lips, that this was another clear case of sartorial love/hate.

Whereas others might question why one should hate before one questions why one should love, I will tackle the latter first. For I am a proud wearer of bright red trousers; not one of those who wears a more discreet shade of burgundy to avoid stares. And though proud, I am not one who has searched for a reason or an excuse for the attire; my red shod legs are an act of folly. And so, I pose myself the question now; why love?

Firstly, it is clear that I, and many others, adore the colour red. Strongly associated with fire and energy, red is a colour of emotion and passion. And whereas a bright red suit is somewhat comical, a red pair of trousers thrown into a conservative ensemble adds an acceptable amount of ‘spice.’ Red trousers are jolly and mischievous, like the grin of a co-responding bounder as he hops into his motor car. They are also eye-catching and add a little tasteful circus eccentricity to a gentleman, particularly in a sea of navy and grey.

The unfortunate thing about the ‘jolly’ aspect of red trousers is that many people, true to their 20th century upbringing, associate the richer red with Santa Claus – and virtually nothing else. A red scarf is a ‘Santa scarf.’ A red jumper is a ‘Santa jumper.’ And, perhaps the most virulent example of all, red trousers are sniggered at as ‘Santa trousers.’ Coca-Cola must be laughing their heads off because the crimson incarnation of St Nicholas is almost entirely their doing. The saddest thing about this association is that Santa, splendid chap that he is, is scarcely the best model on the circuit.

It also seems to be true that many of the ‘haters’ of red trousers hate them for the same reason I adore them; they are daring and it requires courage to wear them.

I have rarely seen them worn incorrectly; most gentlemen of sufficient sartorial bravery have long since educated themselves in the ways of a well-cut trouser. They look wonderful with brown and tan shoes, blue blazers and also tweed jackets. Sky blue, white, navy and mid-grey are magnificent partner colours.