Sartorial Love/Hate: The Windcheater and Blazer 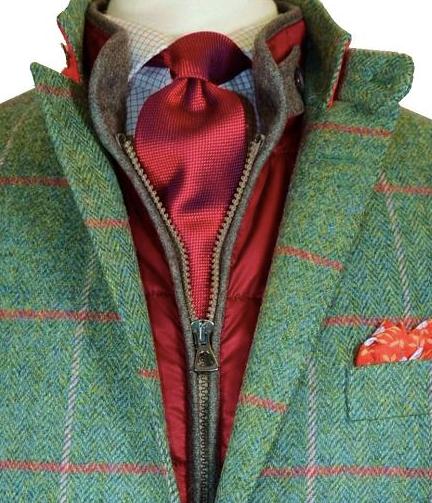 Of all the unholy alliances in the sartorial world, the windcheater and blazer is one of the oddest. It is a fashion that utilises the functionality of modern technology (the windcheater), allowing the classic aesthetic (the blazer) to be worn without the need for a scarf or an overcoat. As such, the intention of its invention is noble. However, the result of it divides opinion; I, for one, am not in favour.

There is a sporty jauntiness to the combination, I’ll admit. Combined with a shirt, tie and hastily stuffed pocket square, it provides a chap with the look of le dandy sportif. The sort of thing he might wear to keep warm at the rugby match or on a late autumn walk. However, though the blazer conceals much of the windcheater, making the awkward marriage almost invisible, the slight amount that pops up between the blazer’s lapels is like an unsightly boil on a perfect face.

Classic design rarely matches well with modern sportswear. Like the jarring look of the trainer and the suit trouser, this pits items designed to be worn apart together. “Get over it” some say “the blazer is not sacred!” Promoters of it, far from ignoring the starkness of the combination, positively celebrate it. For them it removes the blazer from the stuffy world in which it is primarily used, re-engaging it with the dynamism of it’s original sporty design.

Detractors on the other hand, consider it sacrilege to combine the sartorially sublime with the ridiculous. The blazer has sensible partners they would say; the jumper, the waistcoat, the cardigan. The key is that all these partners are subordinate to the blazer. One would never wear two jumpers, two shirts or two blazers. Each layer represents a level of it’s own. The windcheater and the blazer exist on the same level, and therefore they should not be worn together.

The windcheater, despite hogging the ensemble, has the most to gain from the alliance. Without the blazer it is but a simple and lowly protector against the elements. The blazer, being grander, stoops in such a combination.

Despite such objections, the trend has moved on to the extent that some high street stores have offered blazers with zip-in windcheater linings, some of which are, bafflingly, only partly functional; mere strips that create the effect, but do not provide the warmth. “It’s not that bad” one acquaintance casually opined “if you turn the blazer’s collar up, it actually looks pretty cool.”