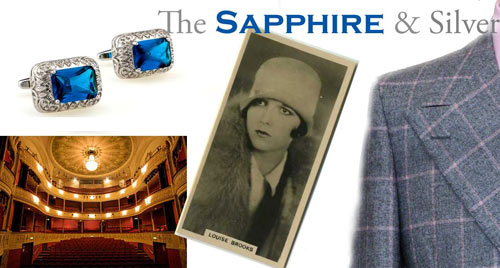 The Sapphire & Silver man frowns at the menu in front of him, hiding his pained expression from the waiter hovering at his table. His lunch appointment, an ingénue with the voice of a husky veteran, is late. After repeatedly flicking his sapphire jewelled cuff to check the time on his vintage Cartier, he huffs impatiently and orders a bottle of Perrier Jouet. Two glasses later and the starlet arrives, red cheeked and flustered, offending the quiet elegance of her patient companion. After some apologies, and a few naïve, wide-eyed compliments regarding his window-check flannel suit, discussion of opportunities begins, with the nattily attired impresario describing the role of a smoky nightclub hostess. The ingénue listens attentively as the Sapphire & Silver man flicks his cuffs in Coward-like expression, gently touches his Novello waved hair and orders a consommé. He winces at his companion’s inelegant devouring of the remaining warm bread roll, struggling to imagine her as his restrained 1920s beauty with a Louise Brooks fringe when she suddenly grabs his Turnbull & Asser cuff and two buttery fingers fiddle the antique sapphire and silver cufflink that once belonged to the great Henry Irving; “Oh they’re beautiful! Are they real?” 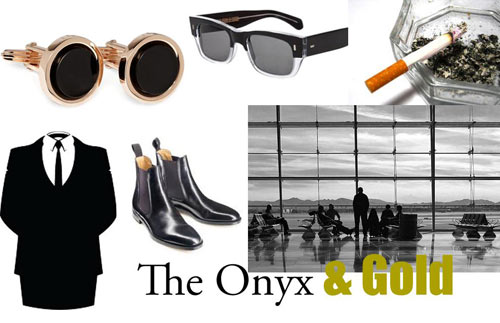 The chain-smoking Onyx & Gold man sits on the chilly balcony of the first-class lounge, watching the planes taxi to and from the terminal, dragging on a Marlboro Red. His heavy, tanned, masculine hands are decorated with signet rings and, though the sun only offers but a cameo appearance, his black Cutler & Gross sunglasses remain firmly on his head. Dressed in a black suit, white shirt and black Chelsea boots, he is elegantly but anonymously attired – hoping to be mistaken for a spy – and contrives a Fellini-esque pose as his cigarette-hand sleeve drops back to reveal an onyx and gold link. A frequent flyer, he avoids the usual activities of fellow travellers; his laptop, his papers, his Blackberry, are never seen. His work in claims adjustment is an embarrassment to his ideal, urban Tarantino aesthetic and so he never delves into discussion with fellow loungers; instead he casts aloof, smile-less looks toward attractive females in an attempt to disarm. He hears a distant shout from some inconsequential acquaintance as he paces towards the gate and, attempting to ignore it, he strides into the mensroom to evade his follower and prolong his pleasant fiction. 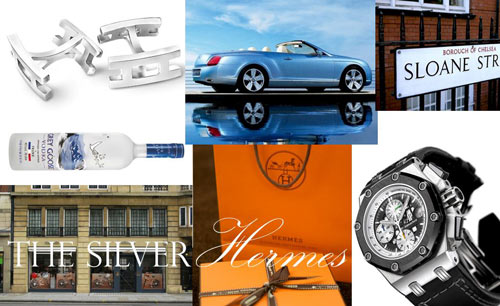 A bright blue Bentley sits on Sloane Street; impossibly clean, arrogantly situated outside Hermes. Passers by, admiring its sleek lines, jump in shock as it suddenly growls with life; the Silver Hermes man, in a pair of dark Armani jeans, a light blue Turnbull & Asser shirt and Tods, dashes out of the boutique clutching several tangerine bags and climbs in slowly whilst smoothing his slicked hair, flashing a harsh-white smile to the inquisitive promenaders. The door slams, the car speeds off with a hound-like howl. Sloane Street, the modern Rotten Row, is the daily haunt of the Silver Hermes man. He spends most of his time driving up and down with a friend in one of his expensive cars, parking at Harrods, lunching at the Mandarin Oriental and answering phone calls in a variety of languages. No one knows exactly what he does, although the Middle Eastern plated cars lead most to draw their own conclusions. He is also seen in the VIP areas of Mayfair clubs, deep in conversation with a number of associates, flanked by statuesque women and vast bottles of Grey Goose vodka. He appears to dislike jackets and favours car-to-door valet services when the chill comes. He loves to accessorise his relatively minimalist, I-don’t-have-to-try look with a few obviously expensive items including a chunky Audemars Piguet, a Hermes belt and matching ‘H’ Hermes cufflinks, which he loses and replaces with startling frequency. 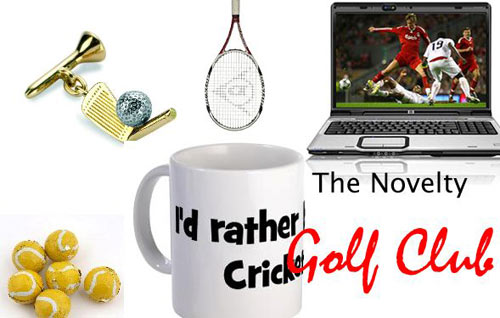 The Novelty Golf Club man is an active and amiable chap. He has very little interest in his day job, working as a financial director for a large company, and spends as much time as possible chatting result speculation and betting odds with the young, sport-following graduates who congregate in the kitchen at strategic points in the day to watch the ticker-tape screen of the sports news channel. Although he looks somewhat like a bouncy castle, he is a keen sportsman and a six handicapper and organises team-building tennis tournaments with relish. He even encouraged a managing director to have an away day at the company box in Twickenham, although ‘back-to-back’ meetings prevented clinching such a coup. His desk, an appalling mess if ever there was one, is where he keeps an eye on the various scores with open tabs dedicated to refreshed scores and video highlights of cricket catches, tie-breaks, goals, tries and long putts. It was without surprise that he bounded into the office in January showing off his Christmas stocking fillers with pride; a punny cricket mug for his tea, a box of chocolate tennis balls and a pair of novelty golf club cuff links, bought by his forbearing wife.