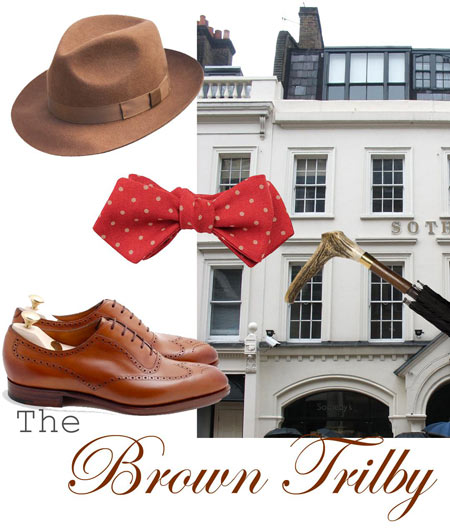 “I have eight-five with the gentleman at the back. Do I have eight-six?” the auctioneer declares to a fidgety and disinterested Sotheby’s floor that is largely comprised of non-bidders who have stopped in for a spot of observation.

A collector and auction room regular, the Brown Trilby Man sits at the back of the room – bow tied, waistcoated – awaiting a superior offer, quietly confident that his only competition, a telephone bidder, will inform his appointed agent that he is no longer interested. He brushes off his coffee-ground coloured Bates trilby with conclusive delicacy as the auctioneer draws the bidding to a close. As he looks around the room, he sees no other serious collectors of note and congratulates himself on making an inspection of the object before bidding, knowing that the item in question is actually rarer and more valuable than the estimates.

A supercilious smile on his face, he stands up in his Edward Green brogues holding his horn-handled umbrella and walks back to his Marylebone flat where he is greeted by Arthur, a tubby Himalayan. He locks his recent acquisition away in a Japanned chest-on-stand; it will only be displayed when fellow collectors and dealers come to call. 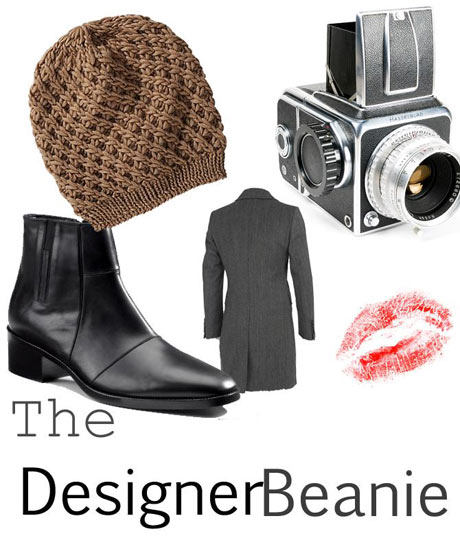 The Designer Beanie Man brushes past two in-the-way, middle-aged out-of-towners who are loitering at the entrance to a Bond Street emporium. As he does so, he abruptly ends their frivolous commentary on the geography of the street and provokes one to whisper too conspicuously “Oh he was handsome…like a movie star!”

The Designer Beanie Man is indeed very good-looking, although he is not an actor. After a brief stint of modelling, he moved into advertising when he began an affair with a planner at Saatchi who gave him an easy job in her office so she and her friends could flirt and wink at him as he brought them their coffee. Proving more adept at creativity and planning than expected, he rose quickly and came to be admired by a number of the directors.

Now on the other side of the camera, photography has become a hobby through which he meets many of his elegant girlfriends. He dresses in a slick and expensive fashion – fashion being the operative word – and wears simple and elegant overcoats with skinny trousers and Chelsea boots from Christian Dior. He has a collection of designer beanies which he uses to cover his thick hair but is careful not to hide his million-dollar visage. 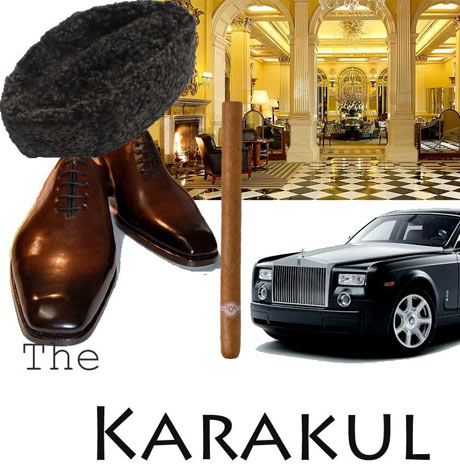 An enormous car growls outside a glittering Mayfair palace hotel, a liveried doorman hurries to open the rear left door, out of which a silk suited leg appears, shod in bespoke wholecuts. Cigar ash drops on the pavement and the Karakul Man, sunglassed, stogie-sucking and wearing an astrakhan collared cashmere overcoat, looks blankly at the hotel staff who flash him wasted smiles.

It is said he once worked for Howard Hughes in Las Vegas, until the famous hotel-living recluse fired him for his suspected connections to organised crime. His Karakul is cocked Jinnah-style on his grey head, its charcoal tone contrasting splendidly with his unplaceable tan.

The manager of the hotel welcomes him in to a glittering marble lobby and instead of making his way to the desk, as is the expectation of other guests, strides into the bar where a young, attractive woman rises to her feet and heralds his appearance with a frantic shaking of her multi-bangled wrists. Though boasting a small but well-groomed entourage, no one communicates with the Karakul Man who stares back blankly at his bangled companion as she giggles through one tedious story after another. Sensing impatience, two tall, dark and Bluetoothed men throw anxious looks across the bar as the Karakul Man rises with his young female companion, holding her firmly by the elbow and makes his way to the elevator.