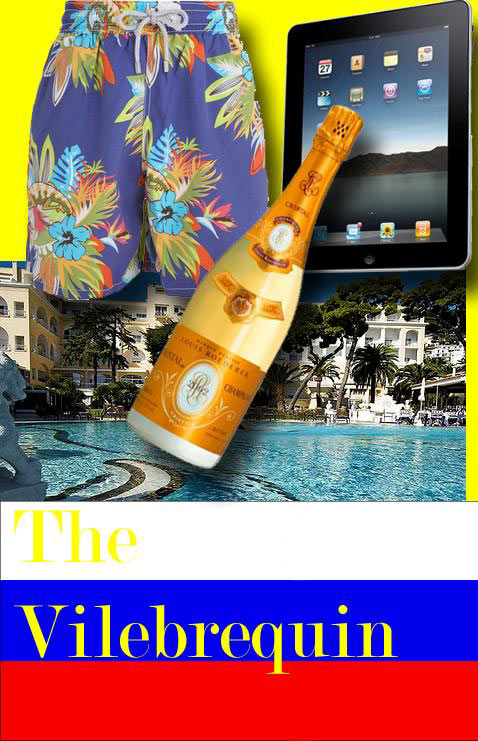 The Vilebrequin man reclines in relief after his dip in the saltwater pool. His younger girlfriend, earphoned and sunglassed, reacts with the harshest Muscovite disapproval at his playful embrace that covered her perfectly dry and tanned body in cold, chlorined water. Taking a sip of his chilled beer, he turns to his iPad with dissatisfaction, soon tires of its novelty and, frustrated, sits up to observe the moneyed bodies that traipse around the £1,000 a night hotel pool. He eyes the Vilebrequin trunks, ubiquitous in this class of establishment, and sighs with relief that he was not to be outdone by a bunch of has-been American tourists; his own designer shorts, though expensive, were embarrassingly cheap in comparison to the Indigo Blue Chameleon Classics that he had spotted the day before near the Piazzetta. When one of the has-beens wanders near, he whistles to a waiter and, making himself ridiculous, shouts his order “Hey…we want champagne. The best.” 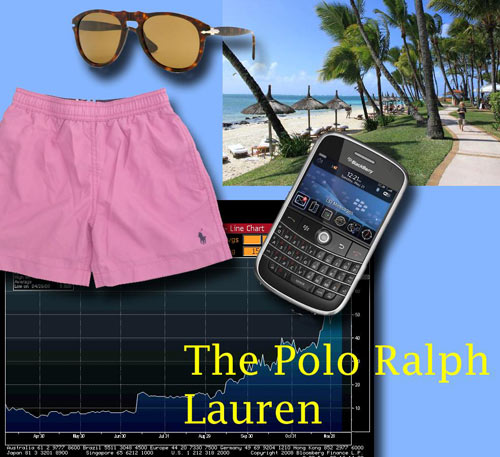 The Polo Ralph Lauren man is not on holiday, and he wants everyone to know. He sits on the beach, loudly initiating sell orders into his hands-free Blackberry whilst tucking in to a club sandwich, which he uses as a gesticulative prop to point at unidentifiable places on the blue horizon. White-uniformed beach staff, carrying chilled sour fruit, are waved away; as soon as he has finished one call, he makes another as he strides down the beach with one arm folded across his midriff. His pale pink Polo Ralph Lauren swimshorts, as dry as their day of purchase, seem to promise a life of tropical cocktails, line fishing with local yachtsmen and jet skiing in the rarefied waters of the Indian Ocean. So far, the closest they have got to a dip is bearing the brunt of an awkward lunchtime spillage that was met with laughter by fellow guests, sweet apology by the perpetrator but only Persol-veiled disapprobation by the Polo Ralph Lauren man. 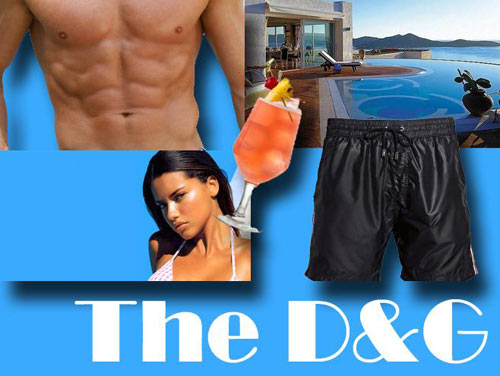 The D&G man lies tanned and oiled in a conspicuous position. His girlfriend and her friends have gone down to the hotel’s private beach but due to his aversion to sand, his wandering eyes and his thirst for attention, he has decided to remain alone by the pool where he is watched with a mixture of suspicion and lust by the middle-aged hausfrauen who have long since ceased to love their tubby, snoring husbands. Nodding and tapping his foot to the Europop iPod playlist, he stretches an arm out to the waitress, orders a MaiTai and persuades her to take a sip and a seat next to him. After a bout of teenage flirtation, she takes a picture of the two of them pouting into the camera. His smile fades as he catches sight of a more delectable prospect dipping her toe into the pool; he stands up, waves his thanks to the waitress, flicks the waistband of his oil-slick D&G mini-shorts and dives athletically into the cool water. 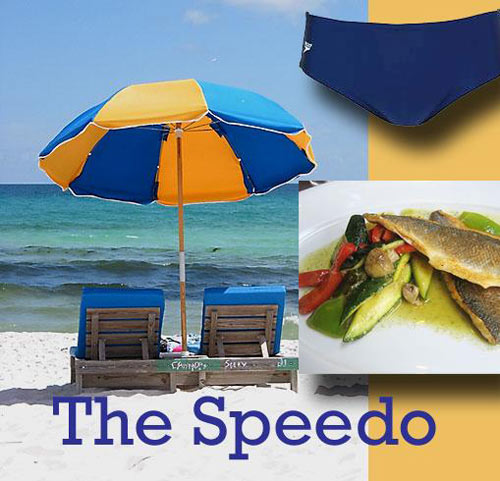 The Speedo man stands proudly in the water, surveying the frolicking crowds. A man of nearly seventy, he regards his body with satisfaction as a young female smiles politely as she swims past. He looks back guiltily at his wife, comatose under a vast umbrella, and rejoices in his position; the sun, the sea, the smile of a young lady. It will not be long before his wife wails to him that it is time to eat, when he will turn from the sea to his much-neglected sunlounger to dry his legs, don a linen shirt and skulk up to the deck for lunch, invariably a white fish and salad served on a white tablecloth, opposite his wrinkling, grouchy wife who scolds him for rejecting her suggestion of wearing shorts to the luncheon table. He gazes down at his navy Speedos, stung by her notion that ‘no one wants to look at what you’ve got down there’ and dreams again of being in the water, breathing in the air and taking in the view.