I was happy to bear witness to a miracle recently:

An entire weekend of 20º+ sunshine.

Though the evenings were reassuringly chilly, the sunshine hours were bizarrely beautiful – cloudless and very, very warm. Having recently unpacked my spring/summer wardrobe, I decided to mark this doubtlessly transitory moment of delight by striding out gleefully in a pair of tailored shorts.

Unfortunately, I got the distinct impression that the majority of the populace either cared a lot less for my pins than I do, or that they were a lot more in-tune with the fashion press than I had imagined, for it was not two weeks before that a certain Tom Ford had ordered the male population of the world to confine the wearing of shorts, irrespective of smartness, to the beach or the tennis court. 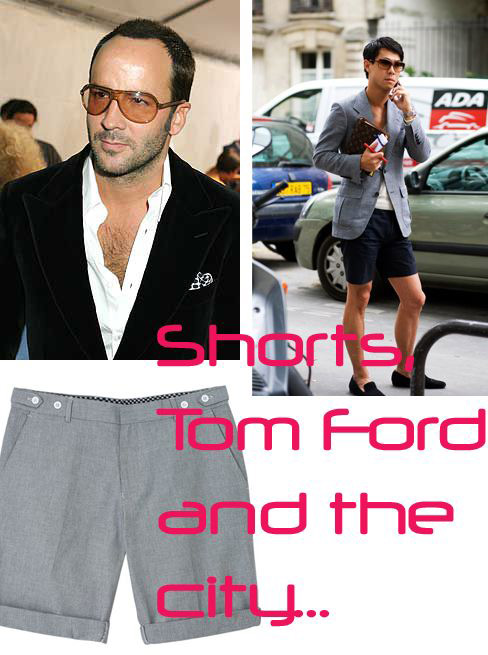 The full quote is a little more prescriptive, dictating that it is the metropolitan environment in which shorts must never be worn;

How this logic applies to ‘cities with beaches’ such as Los Angeles or Rio de Janeiro I do not know, but I do think Mr Ford is correct about flip flops; there is something rather appallingly Dickensian about a pair of blackened feet in a pair of blackened flip-flops. It’s bizarre that metrosexual men should go to the lengths of donning clean clothes, wearing deodorant, trimming eyebrows and moisturising faces only to wander around the dirty piss-stained streets, filthifying their soles in a manky pair of jandles.

However, I don’t think Mr Ford’s assertion about shorts is right. It depends on the shorts, it depends on the legs and it depends on how they are worn. A pair of tailored shorts on a good-looking Spanish model who wears them with a tailored shirt, bow tie and sockless loafers would surely be something to excite, rather than disgust, Mr Ford himself.

The most amusing commentary on his words belonged to the readership of the Mail Online. One reader wittily pointed out that his legs were no less attractive than Mr Ford’s hairy chest, which is frequently exposed, and that in order to avoid hypocrisy he should button-up accordingly. An ill-informed commentator applauded Mr Ford for his comments and was ‘sure Mr Ford’s wife is happy he maintains his dignity.’

Another misguided soul, the most long-winded of all, asserted that it must be Ford’s own lack of confidence affecting his ability to trot along the street in a pair of shorts; the probable truth is not that the short-wearing of Ford and his own circle had driven him to revulsion but that of the teeming non-photogenic pig-white masses.

There is an argument that shorts, because they expose an unnecessary amount of skin, are inelegant in the city; after all, the city is a place of offices, sleek cocktail lounges, smart restaurants, theatres and draconian department store security. However, it is a little selfish for a man of Mr Ford’s position to suggest that the working population, which he has an apparent respect for (‘A gentleman today has to work. People who do not work are so boring and are usually bored…’), cannot make the most of a few days of sunshine, and feel the all-too-absent sun on their legs in a pair of smart linen shorts.