Should I Listen to My Tailor? 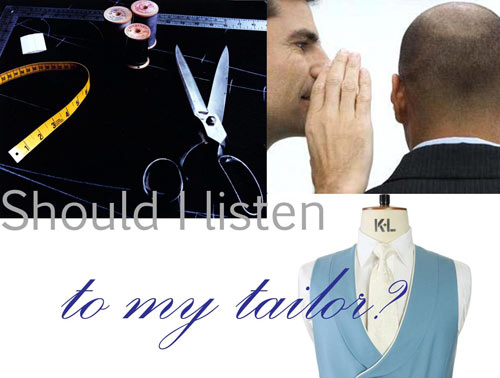 Of all the questions that I have been asked, this is one of the most strange. Why was it asked? A reader of my blog was having his first bespoke suit made and requested a double-breasted waistcoat. The tailor suggested a single-breasted waistcoat instead. The reason? “…they said it was old-fashioned and not very flattering.”

Sighing deeply and smiling in disbelief, I began to think about the issue of relying on a tailor’s advice. Is there ever a time you should not heed their advice? Should they lead you blindfolded? Should the tailor’s opinion always trump your own? After all, they all know a lot more than any customer about making suits.

A tailor is the one person best placed to offer a novice advice. If you are purchasing your first bespoke suit, the advice a tailor can provide is invaluable; no magazine editor, columnist or style maven is better placed than the man with the tape and scissors. It is his job to know his trade and you would be a fool to reject his advice as a point of pride. Many who go to have their first suit made know very little about tailoring and are often stunned into procrastination by the myriad of options available.

The tailor can calm fears and make recommendations in cut, cloth and style. He measures your body, understands it, asks you pertinent questions and, if he is a good tailor, will rapidly build an idea of the sort of person you are and the kind of suit you want or need. However, to those who are not inexperienced in such selections, an unfamiliar tailor can be rather intrusive. I have heard anecdotes of tailors insisting passionately against a customer’s request, denying them creativity and even refusing to make something which, in their view, would shame their name.

Of course, it is expected that a tailor would seek to protect his reputation. The suits themselves are sometimes the only marketing tool that a tailor has at his disposal; if making a suit would mean that his name is connected with the sort of sartorial ghastliness that would make even the most hardy of style experimenters wake-up in cold sweats, he would rather refuse the money and not make the suit at all. There is no cab-rank rule with tailors; they often decline business if it does not suit both parties sufficiently well.

However, in the situation described by the reader, this recommendation goes beyond any point of teaching into the dubious realm of opinion. A tailor’s opinion should always be respected, but it does not have to be taken – even if the customer is a novice. He had seen a double-breasted waistcoat, liked the look of it and wanted it for himself. The tailor halted his swagger. I have had my fair share of tailors telling me what to do, particularly when it comes to alterations; “That’s too tight”; “Those trousers are too short”; “You want the waistcoat that high? That’s a really old fashioned look.”

In many instances, they cannot help providing this advice as it is simply a reflex to unusual requests. However, the best tailors will seek to provide guidance but also accept that it might not always be heeded; in which case they will simply try to create the article as the customer has ‘bespoken’ it. If it goes wrong and the customer doesn’t like the result, the tailor can always stand by the fact that guidance was offered, and rejected.

Should you listen to your tailor? Absolutely. But remember your own convictions when they are challenged.