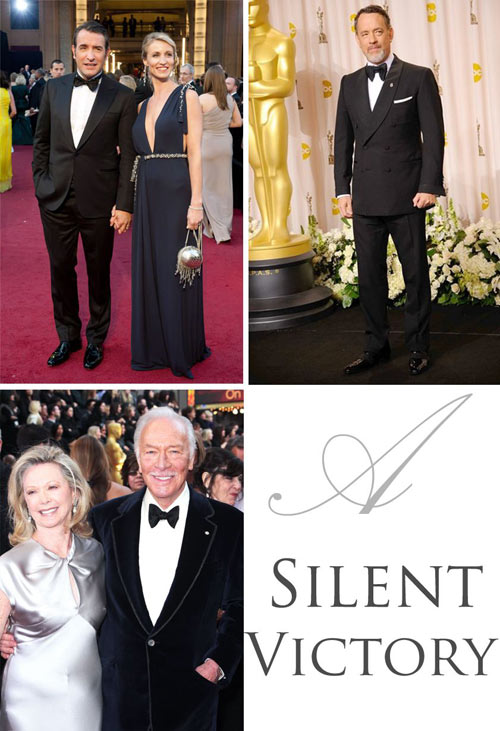 There was a silent victory at this year’s Oscars, and I’m not talking about the success of Michel Hazanavicius’ splendid ode to old Hollywood.

Scrolling through pictures of the gentlemen’s arrivals on the red carpet has been, at times, a trial; an exasperating examination of the mess that occurs when money, big-hitting fame and marketing collide. Ludicrous designer name-dropping, star names that look as comfortable in their evening attire as a lobster in a cooking pot, overlong trousers, training shoes, clip-on bow ties; everything that old Hollywood wasn’t.

One of the most popular punctuations on the descent to inelegance was the introduction of ‘Hollywood black tie’ – wearing a black necktie instead of a bow – an event that had many wondering if the ‘dicky’ had seen it’s last day. Until a few years ago, almost everyone had converted to this new red-carpet religion; only a few scattered old boys and non-conformists still sported bows.

Thankfully, this trend has been reversed. I say thankfully, for even though the black necktie has been argued, on these very pages, as being at least as correct as a black bow and certainly more correct than coloured bows, the continued blurring of the informal with the formal was not something that encouraged me. Particularly as the women continue to take it seriously and approach the ceremony as one of the few opportunities to wear formal full length gowns.

Considering your partner is crucial in dressing. Fortunately, when it comes to dressing for the evening, formality is the lady’s prerogative; thankfully, women never ask ‘Oh, are you not wearing full black-tie? I might not bother then.’ Though invitations stipulate ‘Black tie’ – and therefore focus on male attire – it is the women’s approach to this dress code that often keeps the lazier and less sartorially observant men from drifting. Women choose to look fabulous; men are often forced to.

This year, there was far more to please the eye; Tom Hanks was looking stiff and uncomfortable in white tie at a Buckingham Palace reception last year but he has clearly grown into formal dressing as his ensemble belied any discomfort he might have felt. Although there were a few who had bungled their outfits, this was a better year for Oscar elegance.

“And what was the silent victory?” you may well ask. The return of the bow tie. Even the badly dressed accessorised with one and few wore it better than 82 year old Christopher Plummer who, along with the Hazanavicius-Dujardin juggernaut, sneaked a bit of ‘old Hollywood’ back into the frame.