“That’s a silly suit!” a client exclaimed to me recently, observing a long-haired rake, reclining languorously in a chair in a light grey suit with a thick white window check.

We had been looking around to capture the attention of the overworked waiting staff, and the rake was difficult to ignore. The rest of the room was a forest of dark grey and blue, so uniform that it looked like a gigantic canteen for household staff.

In the early spring sunshine, they looked like moody grizzly bears; unprepared for the end of their hibernation. The rake, by contrast, looked like a flower, poking out from dull rocks.

“I don’t dislike patterned suits” the client qualified “but that’s just too silly.”

Extravagantly patterned suits seem to evoke such responses. Men are naturally sartorially conservative. And when it comes to suits, this conservatism is amplified.

Men may happily smirk roguishly in a pink shirt or a Madras tie with the confidence of a Parisian dandy, but bring on a bold chalkstripe or an aggressive Glen check and he turns into a Victorian accountant.

Such a dour retreat has no place next to the daisies and tulips of springtime, the season of optimism. This is the time to bring out the spectacular in suiting. It’s time to get silly. 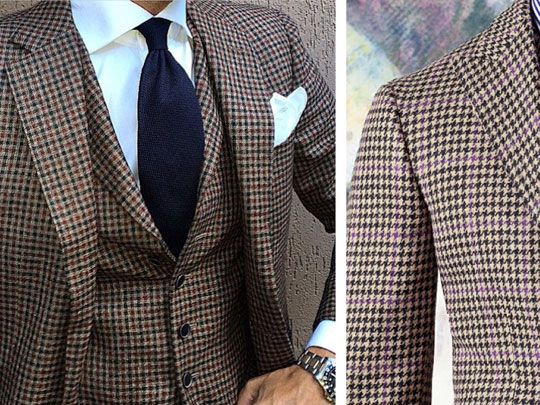 The giant houndstooth suit is one of the most aggressive suit patterns.

Unlike smaller houndstooth patterns, which look like a solid colour even from a short distance, the giant version is visually arresting, even dazzling. It brings to mind E Berry Wall and ‘dudism’; it’s the sort of pattern you imagine seeing on an Edwardian racing trainer or a latter day Sherlock Holmes. It has a snappy, cheeky quality that – in the impressive quantity of a three-piece suit – gives one the appearance of a dandy academic.

The best combination is brown with navy blue, as worn by Instagram overlord DanielRe. Wear with plain shirts and plain or club stripe ties. Add a pair of chestnut Oxfords and a cream silk pocket square to finish. 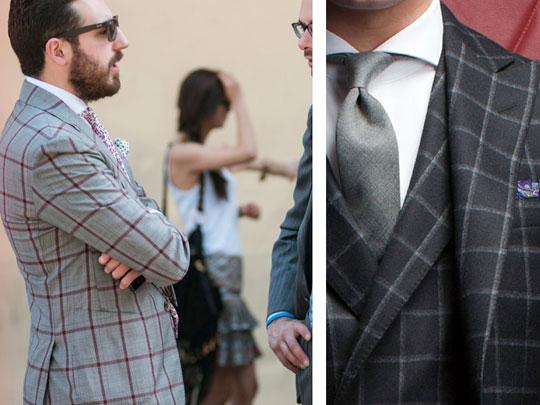 There’s no point in beating about the bush with a “subtle window check” – you need to boldly go where no check has gone before.

Bold window checks aren’t just the preserve of Tom Ford models, either. Sure, you are going to be as unusual and unexpected as an article listing celebrities who look better after plastic surgery, but there’s a particular art to wearing such a creation.

Firstly, pick a conservative background colour such as mid-grey or navy. Also, try and choose a fabric that has a double check, or an overcheck.

Next, get the trousers tapered and shortened so they have no break, provide a glimpse of ‘mankle’ and then wear with plain or tassel loafers – but not driving shoes. This is a fun, sunshine-and-laughter suit that should be served with Negronis and worn with Persol sunglasses. As such, traditional treatment (trouser break and covering laces, worn with Oxford shoes and a stiff upper lip) will create a slightly embarrassed, overly eccentric impression. 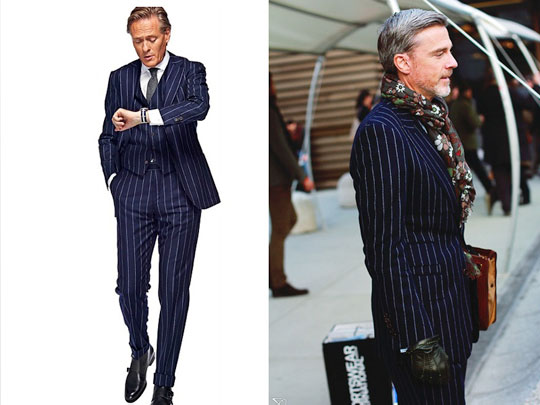 Of course, he was a banker. I actually think the opposite is true.

The pins and chalks are a very English affair, and many people strongly connect them to the City, Wall Street and banking. But it is pins that have taken over as the uniform of the Square Mile – despite what the banker chap told me – as they are, even from a close distance, barely distinguishable from a plain weave. Few upstarts working for the elite of financial services have the cajones to wear chalks in the boardroom.

Chalks are often mistakenly referred to as pins, due to their being visible from a safe, Pitti-pap distance. And they can be very thick indeed.

Navy and charcoal are the most common backgrounds for chalkstripes, but the key to chalks is to wear them wide; the narrower the stripe, the more conservative the suit. I am personally not a fan of narrow stripe suits, and prefer at least half an inch between the stripes, but the really outrageous stripes that are likely to produce scoffs of “Silly!” from my client are at least an inch thick.

Wear carefully, with small check shirts and small patterned ties but, on occasion, go mad on the pocket square. Paisley always looks sensational next to stripes.