Something Different: Coats and Boots 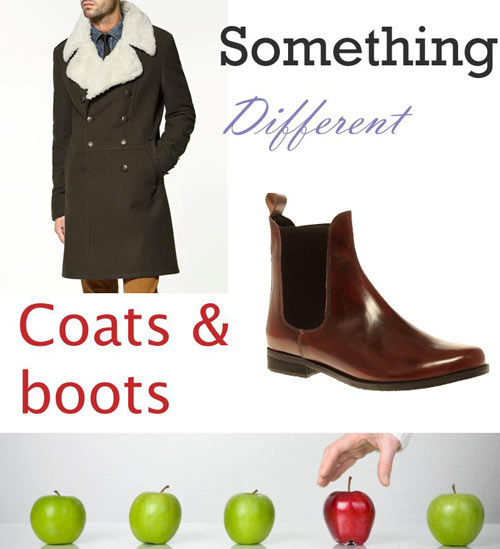 As winter draws near, it is said we turn to the familiar and simple for reassurance and comfort; our beaten-up overcoat, a standard pair of stout boots. These are the things we uncovered and de-mothballed in September as the leaves began to fall. We brush them off, steam them through and touch them with the affection of an old friend. We remember the nights which they shared; the harsh winds, snowfall, sneezing fits and icy tumbles and we thank them for it. But then, through the dimness, something glitters; distracted from these ‘old favourites’ we catch sight of something new, something unexpected.

This is the beginning of another new series. Unlike the Old Favourite series, which lauded the familiar and faithful ‘friends’ of the wardrobe, this one focuses on the unexpected, the different; it celebrates the possibility of trying something a little unusual, attempting a more recherché aesthetic.

There could not be anything more ordinary or familiar than an overcoat. While it is true that not all overcoats are alike, or equal, they are often the most mundane aspect of a gentleman’s winter dress; so much so that the dandies of winter feel the need to ‘spice’ them up with a velvet collar or patterned scarf.

I once https://mensflair.com/style-advice/aristocratic-overcoat.php wrote on the subject of the fur-collared overcoat, the aristocrat of coats, and was only able to suggest a handful of high-priced designer examples for readers to pursue. This was unfortunately due to the lack of cheaper, high-street chains or outfitters offering anything similar. No mistake in this, one might think, as such a gloriously grand coat is the product of a creator who has envisioned something romantically, with abandon: cost be damned. A mass-produced high street version would hardly be expected.

Indeed, finding any real fur on the high street is near impossible, not only for manufacturing-cost reasons but for public relations; no one wants a group placard-waving of animal-rights protestors clogging the entrance to their emporiums. Zara, ever the engine of exploration and design, have produced their own version with a material politely referred to as ‘fur-effect.’ With a double-breasted design reminiscent of those worn by Napoleonic soldiers’ on their Russian misadventure, this coat is a well-crafted piece of nostalgia; as well as its undoubted military heritage, it also reminded me of the elegant hunting outfits of the early twentieth century, an excellent example of which was worn by Rufus Sewell as the Crown Prince of Austria-Hungary in ‘The Illusionist.’

And there’s no need to stop at overcoats. As a reader of my blog once commented, “boots are one of winter’s rare pleasures.” The unfortunate thing about them is that you are rather limited to two colours. Black boots are as common as muck; brown boots are fairly popular, but when did you see a pair of burgundy Chelsea boots? A deep, berry-stain burgundy that warms the eyes as well as the toes.

I was browsing through ASOS’ vast collection of shoes when I noticed a pair of ASOS own brand ALIBI boots in a rich burgundy; ideal for wearing with mossy green cords for a delicious forest-floor contrast. While certainly not the standard of a shoemaker like Crockett & Jones, they represent excellent value.