Despite the fact that springtime in London, though it sounds full of promise, is more likely to be wetter than a drowned rat, I think the best thing to be is optimistic. It might be truly splendid when the daffodils come to line the pathways in St James’ Park and ‘Nature’s coronation’ is upon us once more. When spring is really spring, there is nothing to beat it; the catharsis is unmistakable, youth shines anew. With all the commotion of re-birth, it seems appropriate to adjust footwear for the season. Unless it was particularly wet, thinking forward, footwear for the brighter months should be light and, forgive the pun, incline you to put a ‘spring’ in your own step.

Footwear has come a long way, especially in terms of comfort. It is possible, apparently, to wear things that feel like walking on air, or walking on water, or pillows or whatever a man may desire. However, few of these footwear choices have the attraction of style. They are manufactured, chiefly, for casual wear though their original designs were intended for use in sporting activities.

‘Sneakers’ or ‘trainers’ are forms of footwear I just cannot bring myself to wear. Despite the attractions of comfort, their ugly shapes and inelegance can ruin outfits. For years now I have worn an alternative that I discovered when looking through cardboard boxes of old school clothing: plimsolls.

Whereas once it was possible to purchase several inexpensive pairs from the local school outfitters, because of the current massive trend, they are frequently sold out. The trend has had its benefits; more and more designs are being produced with an emphasis on ‘retro’ shaping. Whereas trainers from the likes of Nike and Adidas are bulky and substantial, plimsolls are slight. They offer precious little in the way of support but they are still comfortable and youthful shoes that effectively ‘de-dust’ the dustiest of outfits. 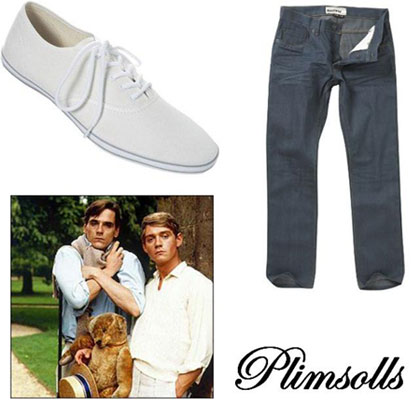 Wear with slim-fitting, short cut denim or with white trousers for something rather ‘Brideshead Revisited’.

In England these snappy shoes are named ‘co-respondents’. In divorce law, a co-respondent is a person charged with misconduct with the petitioners spouse and it is for this that the shoes are named. ‘Ladies men’ were known to wear them and their distinctive twin-colouring earned them plenty of attention in even the darkest hotel corridor. Americans call them ‘spectator shoes’ and though, since the 1930s, they have always been around in a number of specialist stores, they are rarely seen on the streets. Admittedly, they are rather daring and the connotations with cuckolding are unlikely to have made them favourable with the older generation. However, they are also rather splendid and the spring, season of love, is a fantastic time to stretch them out. 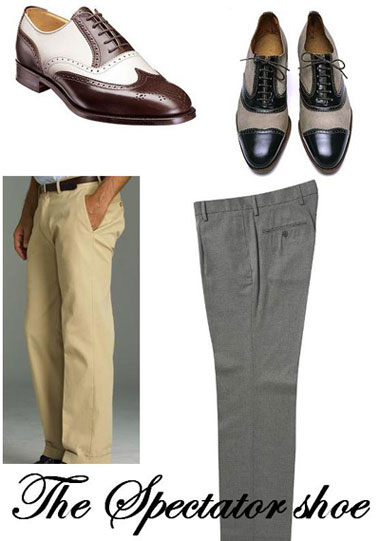 These shoes are fantastically popular among the young, upwardly mobile Mayfair set. The sight of impossibly tall, impossibly thick-haired young chaps kicking around Berkeley Square in chalkstripes and tasselled loafers is like watching racehorses trotting around the paddock ring at Ascot. They are very traditional and despite the jovial tassel, certainly veer towards more formal clothing. 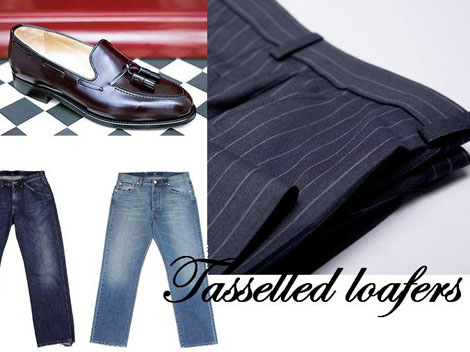 However, it’s jolly fun, and very English, to wear them with classic indigo denim; cut short so that there is no touch between the jeans and the leather.