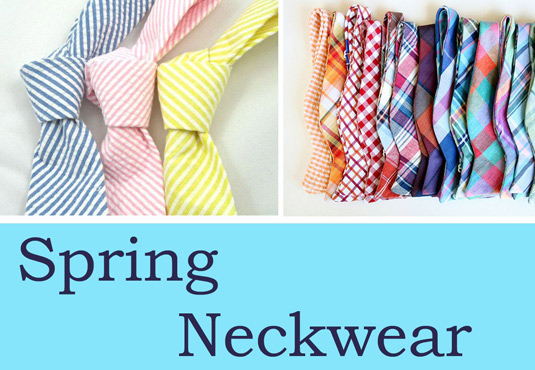 As the sun breaks through my window, and the breeze carries the unmistakable spring-fresh air into the room, I am suddenly compelled to remove the woolly burgundy tie from my ensemble and rifle through my tie drawers for a suitable replacement. Settling on a madras, I tied it in the mirror, smiling in the brilliant light. Despite the fact that this seasonal tease was short-lived (it simply poured for the rest of the day), the sunshine had called and I had responded: it was time for spring ties.

Though I possess a number of cheerful and appropriate ties and bow ties for spring, there are two particular styles which I am looking to add to this year’s collection.

Madras is a favourite material of mine. It has a messy, informal quality which is a perfect foil for crisp blue blazers and white shirts. However, I have never been fond of wearing a great amount of it – madras jackets and trousers are off the agenda as far as I am concerned – but an odd touch of it adds colour and a nabobish character to otherwise uninteresting palettes. Madras bow ties have been Hackett and Ralph Lauren-friendly for a few years now, and I have admired them from afar. I have noted how well they look with a mostly plain and pale palette, for example a khaki suit and a sky blue shirt. The madras fabric is also perfect if your aim is to avoid any of the fuddy-duddy associations with patterned bow ties.

I don’t own much seersucker, but that which I do own gets plenty of use at this time of year, even before the heady summer months. Like madras, it’s a foil for the starch of the rest of an ensemble but unlike madras, rather than adding colour, the pale conservatism of seersucker tones down and complements whatever colour is on display. The texture of seersucker is it’s most important asset; puckered and coarse, it helps balance the swank of pink shirts, grand silk puffs and bright trousers. The seersucker tie is perfect with a navy linen blazer, lilac shirt and green paisley pocket square. Avoid wearing with other seersucker – texture overkill.