Through a much improved diet and increased exercise I have managed to lose about thirty pounds in the last eight weeks.  I am in better shape now at age forty than I was at any time in my thirties.  I plan to lose an additional fifteen pounds in the coming weeks.  That will put me back where I was when I graduated from college fifteen years ago.  While this has been great for my health, my energy level, and my self esteem, it has been brutal to my wardrobe.  So far I’ve lost an inch out of my neck, two through my chest and three from my waist.  At the end of this journey I will be left with shoes, socks and neckties.  Everything else must be replaced.  I will be starting over.

I am in the same quandary as recent college graduates just entering into the workforce.  On the one hand there is a need to quickly fill ones closet with enough garments to make it through the week.  On the other hand is the desire to take sufficient time to find quality items and fit them into the budget.  I intend to resist the temptation to run out and buy a bunch of off-the-rack clothing.  Instead, I have been putting significant thought and research into prioritizing the rebuilding process. 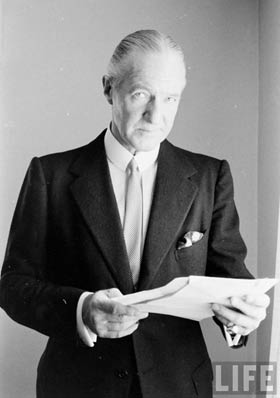 I recently ran across an article, written by George Francis Frazier, Jr., that has provided some measure of guidance.  The article, “The Art of Wearing Clothes,” was originally published in the September 1960 issue of Esquire.  The text of the full article can be found at The Materialist.  In the article Frazier details the history of male attire and names his list of the best dressed men of his time.

Frazier names A. J. Drexel Biddle, the Adjutant General of Pennsylvania, as one of the best dressed men in America.  He then details Biddle’s “monastic” wardrobe.

It includes seven so-called business suits—two double- and one single-breasted navy-blue  serge; one double- and one single-breasted dark-blue pin-stripe flannel; one single-breasted  charcoal-grey flannel. (They were made by either H. Harris of New York, who charges $225  and up for a two-piece suit, or E. Tautz of London who charges, as to do most topnotch British  tailors, almost a quarter less. All have skeleton alpaca linings and the sleeves have three buttons  and open buttonholes. The single-breasteds have three-button, notched-lapel jackets.) For  formal daytime wear, Biddle has a charcoal-grey cheviot cutaway, a single-breasted white  waistcoat, and black trousers with broad white stripes. (With these, he wears a black silk ascot  and a wide wing collar.) For semiformal daytime occasions, he has a charcoal-grey single- breasted cheviot sack coat and trousers, in either black or Cambridge grey, with broad white  stripes. Besides a ready-made Aquascutum raincoat, Biddle owns three outer coats—a double- breasted blue chinchilla ($175 from Tautz), a single-breasted light drab covert cloth ($225, H.  Harris), and a double-breasted polo coat with white bone buttons ($325, Harris). He has, in  addition to a tweed cap, four hats, all of them purchased at Lock’s in London too many years  ago for him to recall exactly what they cost. One is a high-silk, one an opera hat, and the other  two homburgs—one black and one green. For formal evening wear, Biddle has tails ($175,  Tautz), a double-breasted dinner coat with satin shawl lapels ($150, Tautz), and, for warm  weather, two single-breasted, shawl-collared white gabardine dinner coats ($98 each, Tautz).  His evening shirts, with which he wears a conventionally-shaped bow tie, have pleats, roll  collars, and are made for him by Dudley G. Eldridge of New York at $28 each.

Biddle’s sports clothes include three tweed jackets ($160 each, Harris), three pairs of charcoal- grey flannel slacks, and a half-dozen button-down shirts made by Eldridge out of silk that he,  Biddle, bought in Spain. His shoes, of which he has three pairs of black for daytime wear and  one patent leather and one calfskin for evening wear, were made by Paulsen & Stone of  London, who also made for him, for sports wear, a pair of black moccasins, a pair of black  loafers, and two pairs of white canvas shoes with brown leather toes and rubber soles (which he  wears with either prewar white flannels or an ancient double-breasted light-grey sharkskin suit).  Biddle’s neck-band shirts, which are either starched dickey bosoms (elongated so that the  bosoms extend below the middle button of his jacket) or semi-starched pleated bosoms, have  white cuffs and bodies of either grey or light blue. They cost $26 each and are made by  Eldridge, who also makes his stiff white collars ($3 each) and his ties ($7.50 each), which run to  solid black silks and discreet shepherd checks and are shaped so as to make a knot small enough  to fit neatly into a hard collar. His underwear is ready-made and comes from Jacob Reed’s.

Like all men with innate clothes sense, Biddle eschews such abominations as ankle-length  socks, matching tie-and-handkerchief sets, huge cuff links, conspicuous tie clasps, and, most  hideous of all, cellophane hat covers. Indeed, well-dressed men, almost without exception, are  interested in something novel in clothing, only when it is both as attractive and functional as,  say the duffer coat, which proved its value to the Royal Navy in the Second World War.

Naturally, Biddle’s coat sleeves are not only uncreased, but also of such length as to permit a  fraction-of-an-inch of his shirt cuff to show—as, similarly, the neck of his jacket is cut so that  the back of his shirt collar is exposed. As for the width of his trousers and coat lapels, it is  determined, not by the extreme narrowness that is something of a rage these days, but by,  respectively, the length of his foot and the breadth of his shoulders. He selects, in short, clothes  that become him. For anyone who is not as “clean favored and imperially slim . . . and  admirably schooled in every grace” as Biddle is, the Biddle style of dress would be  preposterous. Few things are more precarious than the indiscriminate aping of another man’s  wardrobe.

Obviously most men today would not require the formal clothes present in Biddle’s wardrobe.  Because I live in the American South, I would need more warm-weather attire and less flannel.  Nevertheless, the article presents a fascinating look into the closet of a well-dressed man and proves that a man can get by on a modest selection of conservative clothing.  If you were to update Biddle’s wardrobe for today, what would you take off the list?  What would you add?  Post your lists in the comments.  I’m fascinated to hear our readers’ opinions.