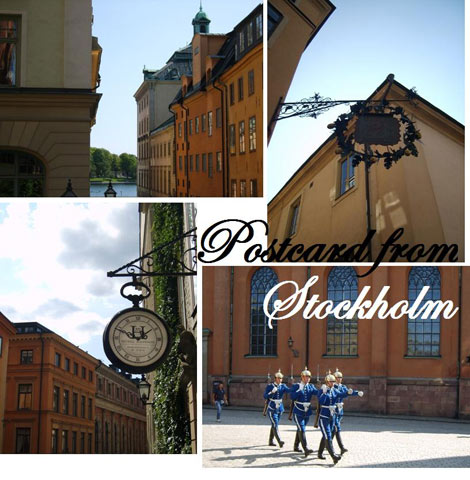 I adore capital cities. As much as I enjoy exploring the rustic magnificence of a nation’s countryside or the quaint villages where few speak English, the colliding and clashing worlds in a capital are what makes them such hubs of importance. Though I had been privy to sceptical mutterings about Warsaw I found it to be a vibrant and engaging city. Not exactly a capital like Paris or London but a city of echoes and opportunity; a strange mixture of a deep and troubled past and a future unknown.

I recently visited the Swedish capital of Stockholm. I had the same sensations of collision; of the internationalism of the city. Stockholm is known as the ‘Venice of the North’; another version of a city that has been built on islands. And, like Venice, a significant proportion of the city’s charm is the water itself; the sound of lapping waves, the glorious sunshine reflecting on ripples. In Stockholm, as in Venice, I went in search of the aesthetics that made the city what it was; the boulevards, the bridges, the Baroque buildings and the blondes.

I had heard, and read, much of the differences between Östermalm and Södermalm some of which were purely sartorial; Öster was traditional and conservative, Söder was youthful and bohemian. It was hardly surprising to me that Östermalm represented the elite, established area of Stockholm with the magnificent Strandvägen, the grand hotels and theatres and that Södermalm represented an old working class area on the rise – directly corresponding to my native London; the West and East ends respectively. Though I did not wish to introduce a seed of argument and contest about the social and sartorial differences of Stockholm, it was with strange and apropos accident that I should favour, out of the entire city, a small area known as ‘Gamla Stan’; the Old Town of Stockholm which lies between these two areas. However, whilst it was full of the most charming alleyways, squares and churches, it was also overloaded with tourists; quite easily, the very worst dressed group in the entire city. About this I am sure the Söders and the Östers can certainly agree. 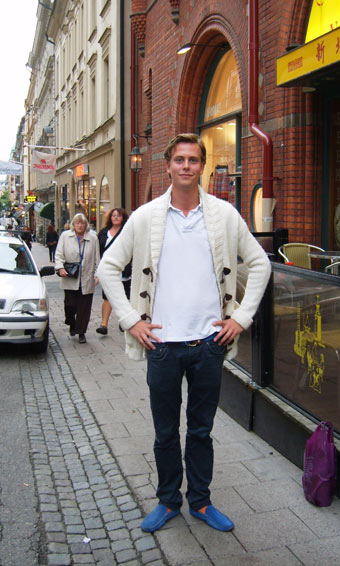 This young man was walking with a group of friends down Nybrogatan; I saw a flash of blue suede loafers, blonde hair and a swinging cream cable cardigan and leapt at the opportunity. For me, this was a good example of casual Stockholm. It’s not stiff and fabricated, nor is it lazy or sloppy; his belt is an appropriate colour for his shoes and an appropriate style for the casual nature of his dress. The cardigan is splendid as it captures the essence of ‘Fisherman chic’; a style that seems so relevant in maritime Stockholm. The loafers add summertime Mediterranean warmth to what is really the very picture of a casual Baltic ensemble. 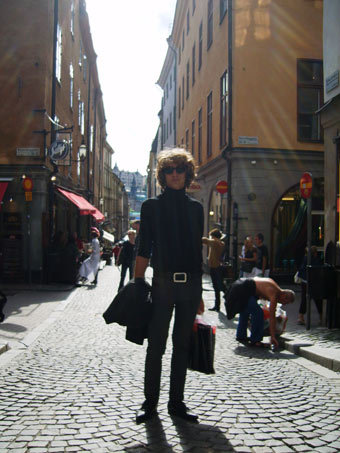 This genial chap was encountered in the quaint streets of Gamla Stan. The Dylan-esque hair, sunglasses and moody colourings make him a prime example, I have been informed, of Södermalm style. The trousers are well-cut (a refreshing change from London – most men in Stockholm know how long their trousers are supposed to be), the style may be simple, but it’s the fit of the rollneck, the nonchalance of the ‘mane’ and the belt buckle which make him photographable. Androgyny is not a particular look I favour but in this instance, it works rather well; the delivery is all about subtlety. 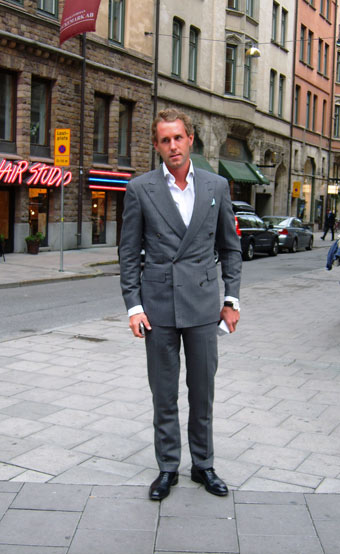 This gentleman, who, facially, looks like a combination of Ben Affleck, Ryan Reynolds and Ryan Gosling – with a smattering of Gordon Gekko – was rather busy on the telephone when I requested his portrait but he acquiesced to my request. He was chosen for his excellent use of the double-breasted suit, but also as an example of how well-fitted the clothes of Swedish men were. Aside from the slick-backed hair, the striped shirts and the pocket squares, the most appealing aspect of Stockholm sartorial style was that the suit wearers appear to have attended some magical ‘Wear a suit that fits you properly’ night classes; from bouncers to bankers, web designers to waiters, no matter if the suit was from H&M or Sulka, their suits fit well. Very well. Some might regard this photo and draw upon the fact that the material pulls slightly across the centre. But is it too small? I think not. I think little ripples of material actually work and make the wearer look fitter and younger; too often, men drown in badly fitting DBs.