What do your stripes say about you?  Whether I like it or not, the striped cotton creations I purchase on Jermyn Street do reveal a good deal about my character.

For instance, my preference for old, ordered patterns – akin almost to Regency stripe wallpaper from Sanderson – exposes my love of the classical and the old-fashioned. Similarly, my reluctance to wear outrageously thick stripes or stripes of acidic tone, reveals my cautiousness and lack of daring.

Anyone analysing my striped collection of shirts would judge me an aesthetically traditional conservative, and this is, without doubt, the most correct observation one can make. Even when my shirts do veer slightly from the classically hued Corinthian columned variety into something perhaps a little more exotic in tone, slightly more experimental in pattern, I tend to tone down the daring with a sober tie.

Stripes, so long a pattern of camouflage, can actually be terribly revealing; to expose your bias and make naked your idiosyncrasies. I admit, there is an awful lot of scope for generalisation on this topic.

Of course there will be those who purchase a great range of stripes and who have the mightiest sartorial capacity; no style being off limits, no stripe too thin, too bright or too wide. However, I do find when I am casually eavesdropping in the bustle of a noisy shirt maker on Jermyn Street that people do have their ’types’ when it comes to ‘stripes’: “It’s not really me that one…”; “Nope, sorry – I’ll do pink, but not pink stripes”; “Hah, I’ll look like a butcher in that!”

Opinions on the thousands of stripe designs that flood the ever popular high-end shirt market can frequently be heard if standing within earshot and the one thing that strikes me is how judgmental stripe buyers can be.

Purchasing stripes, it seems, is rather political. An old gentleman in a covert coat when offered a pink and black natty looking model, straight from the style books of Etro or Paul Smith, might look askance at the shop assistant as if they were an Etonian who had just been offered an Old Harrovian tie. 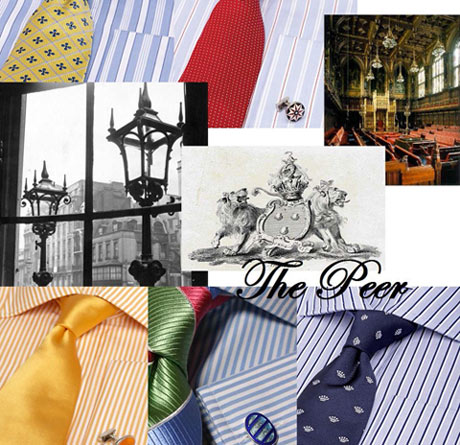 As one of the few remaining hereditary members of the House of Lords, the peer is keeping up appearances for all aristocrats across Albion.

In the good old days, the unelected House members could dash into their seats for a chat and a quick vote and be off to White’s or Pratt’s before three – all in the tailored, but evidently ancient, clothing they wore the day before.

Bengal and Regency stripes are the general rule for the peer and the old made to measure cloths are making way for ’adjusted’ versions timidly suggested by Timothy at Turnbull & Asser. Healthy looking blues with feint touches of white and red are emblematic of his renewed patriotism and the only exception; an uncharacteristic Satsuma-tinted Bengal, which has become his favourite shirt: the result of a rather flattering comment by a particularly ambitious young female on his staff. 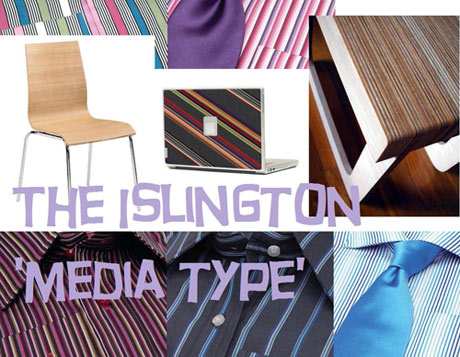 The Islington ‘media type’ doesn’t really like Jermyn Street. It’s just not the sort of place he’d wish to be seen in.

Duchamp, Interno8 and Paul Smith are more likely to receive his carefully bestowed custom and conveniently, they are all located just a liberal hop, skip and jump away from his Soho offices, on the other side of Regent Street.

Traditionalists might refer to his multi-striped shirts as ’busy’, but he rather believes that his style of stripe is a future design classic. As one of the several head-honchos in a powerful P.R. firm, he has the influence, and the cash, to adapt his oh-so-Noughties office furniture to his taste for the nouveau stripe; even his Apple Mac is designed by Paul Smith. 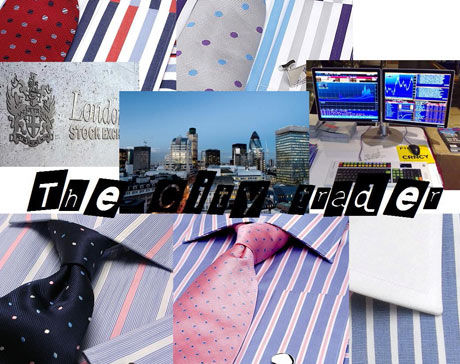 The City trader is a happy chap – he’s just been promoted in his department at the establishment investment bank where he has worked for 15 years. Patience and hard work seem to have paid off and his ‘matey mates’ are very impressed with his quick ascension, if a little surprised; it must be the first time a happy go lucky charmer from an inner city comprehensive has risen so quickly at such an old-school-tie bank.

In celebration of his promotion, a few dozen shirts were purchased on a visit to Jermyn Street. In reverence to the affably arrogant management at the crusty bank, he decides upon a number of generously striped items considering it’ll make him look, as he put it, “more like a toff.”