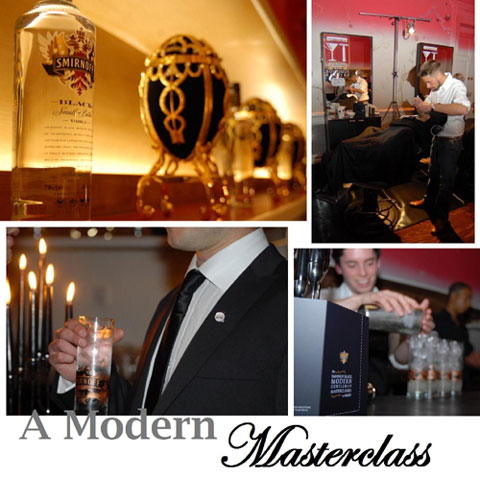 I don’t pretend to know an awful lot about vodka, but I long believed I had an elementary understanding of the types available, a basic appreciation of the varying quality and a rough idea of the different brands; the Russian, the Polish, Swedish, French and Finnish. Though I am yet to Wiki for an insight into the types, number and reasons for distillations, I never suspected I was devoid of useful vodka-intelligence. To my considerable surprise, I was invited to a communications event for Smirnoff Black, a sub-brand of the mightily ubiquitous (and ubiquitously mighty) vodka manufacturer owned by the BWS (beer, wine, and spirits) giant Diageo. The purpose of this event was to promote the Black brand; the small-batch premium vodka of the Smirnoff family that aims to compete with the famous (Grey Goose) the lauded (Snow Queen) and the ridiculous (Roberto Cavalli).

It was not so much the promotion of the product as the method of promotion that caught my attention. The Smirnoff Black Modern Gentleman Masterclasses were designed to acquaint those unaware of the product with the product itself and in an arena of refinement and finery – a ploy that ensures all who attend will in future associate this black labelled spirit with tailored suits, soothing barbers towels and tips from the pages of Debrett’s. For at this event were representatives from A Suit That Fits, Sharps Barbers, expert cocktail mixologist Tristan Stephenson and delightful hosts and hostesses that ensured canapé, cocktail and conversation continuity.

The package of the evening had the effect, from the conversations I engaged in, of promoting well the idea of elegance and discernment for gentlemen – a promotion I applaud heartily. There were conversational currents of etiquette and rules, but there was also discussion of individuality and eccentricity. Mr Bennett from A Suit That Fits embodying the indulgence of the former and the latter in a striking suit that I noted should be named the ‘Wolverine’ for the quite intentional triple ‘slash’ marks beneath the armpits; such thoughtful marketing, as Mr Bennett concurred, introduces sartorial excellence to men more interested in Marvel comics than Chap magazine – the style marketing of the Google generation.

Perhaps because the age of austerity looms, or perhaps because we are bored and now repulsed by excess, but it quickly became clear that the mood of the evening was a balance of taste between luxury and sustained value. A Suit That Fits promoted well the idea of affordable tailoring and were keen to champion the return of the ordinary man to the made-to-measure suit; Sharps had some interesting and practical advice on redness from shaving that did not, interestingly, involve large orders from their product inventory and even the mixologist avoided the fantastical in favour of the sensible; “To be honest, this cocktail is too complicated, and too expensive, to make at home…this one is definitely better for you.” It wasn’t advertised as ‘elegance for the crunched’ but it was remarkably restrained considering the premise; to promote by association. I would have been keen to see another sartorial retailer there – perhaps a famous and affordable shoe manufacturer – to really push the clichéd but effective ‘James Bond’ notion of the event but branding was the last thing to take away from this soiree. This was an occasion to confirm that brands are merely the necessary evil of successful enterprise; that the real value is in creation, experimentation and longevity.