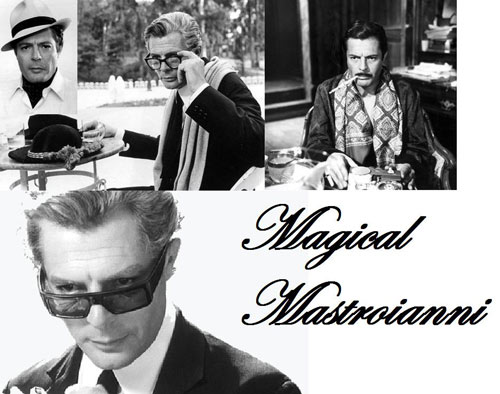 La Dolce Vita was on this morning. It has been an absolute age since I have seen it and I had rather forgotten what a strange but fabulously enjoyable film it is. As I have grown, I feel I have wearied of excessive emphasis on plot; Fellini’s collection of vignettes is a wonderful antidote because, as a movie, it allows your mind to wander as your eyes indulge. And indulge they do. From the earth-shatteringly famous scene by the Trevi fountain to the tender and sweet scene of the melancholy clown, La Dolce Vita is a film of some style.

And what style! It has one of the most beautiful sets in the world in the city of Rome, appealing photography and some lovely costumes. And then there’s Marcello Mastroianni. As I was watching him in the film, it struck me how slight his natural manner could be; how his status as a style icon has a lot more to do with subtlety than beefy bravado. His entrances were not glories of beauty and costume; there was no grandstanding, no self-satisfaction. Mastroianni seemed to float gently through Rome, quietly tipping his sunglasses. He was not costumed extravagantly or outrageously but something in his carriage, the way he wore his clothes – his ‘flair’ if you will – was remarkable. Some might credit Fellini, or the excellent wardrobe department, but I think Mastroianni was a natural.

I compared his talent for wearing simple clothes extremely well to the awkwardness of Gregory Peck. Whilst Peck was a talented actor, he didn’t have the louche coolness of Mastroianni. His shoulders, though magnificent, rather got in the way of channelling any kind of chic and there was something a little too earnest in his manner. Mastroianni meanwhile could act and brood aloofly at the same time. In some people, complexity of cloth is required to make up for, or conceal, the frank but ordinary man within. Mastroianni wore lovely clothes, but they were not dandified; they didn’t need to be. There were quirks, and little touches, but largely his personal costume as well as his on-screen wardrobe never needed theatrics.

As far as style icons go, Mastroianni is one of the most genuine and also the most difficult to mock. Genuine because he possessed something worthy of iconolatry; a complete style: the smile, the look, the sweep of the hand and the crossing of the legs were all a part of it. And it is these innate qualities that make Mastroianni so difficult to replicate. It is comparatively easy to dress like him. It is next to impossible to dress as him. This point was demonstrated in the wonderful Peroni Nastro Azzuro advert. It was an elegant homage to the Fellini film but the model playing the role of Mastroianni, though clothed and styled in much the same way, didn’t have that magical Marcello sprezzatura.