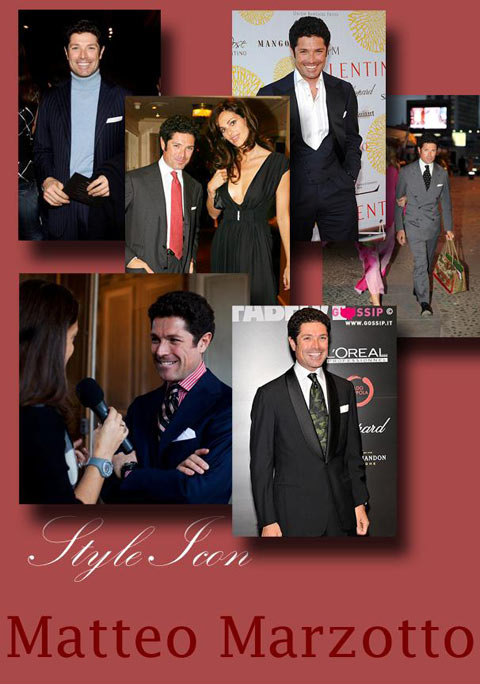 There aren’t many Chairmen or Chief Executives who are worthy of the title ‘style icon.’ Despite being in the pink financially, Captains of Industry don’t dress as their myth would suggest. A great number probably use tailors but evidence of their use is never apparent; a lot of the sheeny-shiny stiff-as-a-board suits worn by business leaders are possibly very expensive, despite being laughably ghastly. A lack of interest is probably the reason; vanity does not always go hand in hand with egotism and leadership is not always matched by inspiration. Money and power shout a heck of a lot louder than the brashest pinstripe suit; who needs an elegant drape when you hold all the power in the boardroom? Who wants a flattering silhouette when you’re buying and selling companies like used cars?

Well, Matteo Marzotto seems to. Undeniably one of the most elegantly attired tycoons in the world, Marzotto – always grinning – is an Italian textiles scion who turned the loss-making Valentino brand into a profitable fat cherry that was plucked in the private equity harvest of 2007 for a little over $1bn. Like Lapo Elkann, the Fiat heir, Marzotto was born into a privileged world. However, unlike the surfer-haired jet-setting überdandy, Marzotto’s association and exposure to the fashion world goes further than whimsical fancy. His is a more serious aesthetic, something self-consciously, though elegantly, ordinary. This is no attention-seeking Milanese orchid, fluttering from café to café; he is a businessman, something horrific to unshackled creatives, and his clothes, though exhibiting a sense of the refined and unusual, are appropriate for a man in his position.

As with many style icons, it is not so much what Marzotto wears but the way in which he chooses to wear it. There may be a few brightly striped shirts, a couple of wacky ties but most of his wardrobe seems to conform to that of any elegant Milanese or Roman about town; a wool suit, white or blue shirt, a dark, patterned tie and a white linen square. An easy, don’t-even-have-to-think-about-it combination, but one delivered with effortless panache. Take for example, Marzotto’s utility of his clothing. Whereas many don tailored suits and treat them with the most extraordinary delicacy, he shoves his hands in his double-breasted pockets, cracks a grin and delivers a wink. He lives in his suits and understands them; many others, by comparison, are like waxworks.

His dark ties are a lesson in elegance for the cringeworthy pastel-crew who, despite an inadequately flattering complexion, insist on the sickly sweet-shop salesman aesthetic of pale ties with pale shirts. Marzotto’s tailor, whoever he is, cuts his suits very well; there is the classic Italian shoulder, a relatively high gorge and an unfashionably large lapel. Despite wrestling for control of iconic brands, as he was with Valentino and he is with Vionnet, and using the names to build the business, Marzotto is a walking advert for everything that is nothing to do with brands; wearing clothing that was stitched by unglamorous artisans. Nothing about his style is unnoticeable and yet, it is not designed to be noticed. He is the sort of man, like Elkann, who learned about wearing clothes from a beloved relative; lectured on the value of a cut, coached in the tying of a tie. A man who really understands clothes is never born; he is made.