Style Icon: The Duke of Edinburgh 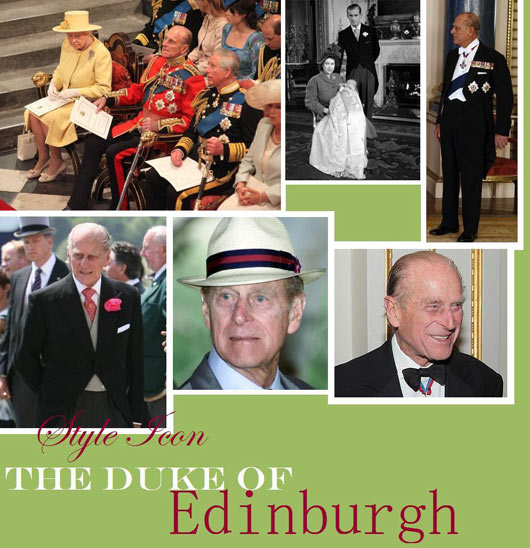 As one of the oldest members of the British Royal family, you would not expect Prince Philip, the Duke of Edinburgh (DoE) to be the most controversial and yet this gruff, plain-speaking, perpetually joking consort to the Queen is rarely anything but. A recent television interview in honour of his 90th birthday highlighted some of his increasingly impatient, fogeyish tendencies and provided some glorious PR-free gems; “I’ve done my bit, it’s someone else’s turn” and “Problem with the world is overpopulation. My solution would be family limitation” and “I’m not a green; I’m not a bunny hugger.”

If there is a Windsor family ‘line’, the DoE doesn’t tow it. Neither does he tiptoe around difficult subjects like his son Charles with hand-wringing or ‘Umms’ and ‘Aaahs.’ Instead, he launches into responses like a hungry beater at a hunt banquet, tearing into topics that politicians won’t even touch with the abandon and self-belief of a patriarch from another age. He doesn’t think much of himself either and his apparent bemusement at social functions, questioning eyes and baffled expression is down to, what he termed, “going downhill.” The DoE is looking for an exit from the circus.

However, as nonplussed as he was to receive birthday attention (“I’m 90, so what”), the DoE deserves further mention and recognition of an asset of his that has never failed him, something he carries so naturally and so free of artifice and something which has, unlike the rest of him, failed to decay; his style. While most people at 90 are stumbling around – if they’re still able to stumble – in Ecco shoes and comfy sweaters, the DoE mucks around in morning dress and white tie – at the appropriate occasions of course – as if he were still 23 years of age.

Recent events confirmed his ability to look comfortable in even the most outrageously flamboyant, brutally regal ensemble such as that he wore to his grandson’s wedding as well as his ability to outshine an assembly of power and celebrity at the Palace for a white tie state dinner. The DoE is a skilled natural in manners of his dress and one of his particular strengths is his maintenance of proper proportions; waistcoats worn at the proper height, trousers cut to the perfect length. His persistent adherence to this is often attributed to his having been brought up in another age, which is partly true, but it seems to be something he has passed down to his eldest son; a rare harmony in a notoriously discordant relationship.

Unlike his son however, the DoE is less ornate when it comes to sartorial decoration. He does not share his admiration for double-breasted suits and prefers a folded white square to the patterned silks, although his tie knot is noticeably thicker; perhaps a nod to the DoE’s acceptance of current fashion. The Prince of Wales is certainly more of a dandy than his father – not an uncommon remark in the history of the British Royal family – but the DoE always seems to be having more fun in his clothes rather than fun with his clothes. Not that there is a problem with the latter, quite the opposite. It is simply that the DoE’s approach, though less accomplished, possesses more idiosyncratic charm.

In his interview, the DoE scoffed when the interviewer asked how he would describe himself at birth “Well, I was a Greek national but I was Danish by race.” And now, how would he describe himself? “Well, I wouldn’t. I’m just ‘here.’”