Style Movie: A Room With A View 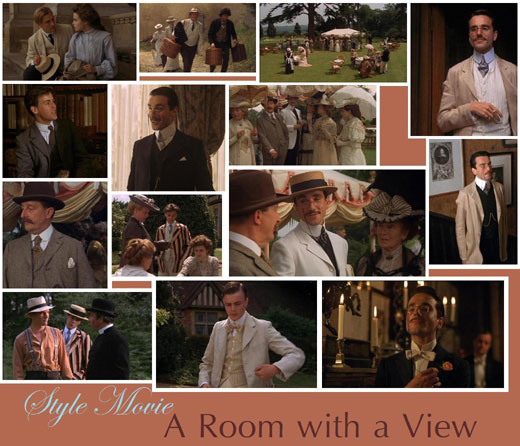 Merchant Ivory productions were some of the few films that were marketed, formally and by word of mouth, by the mere fact that they were ‘Merchant Ivory productions.’ Whereas other films would be related to as ‘the new Spielberg’, ‘that Tom Cruise picture’ or as the vehicle of some other individual of sufficient wattage, those of Ismail Merchant and James Ivory, in a similar manner to the Coen brothers, were accorded the grand respect of being referred to as a product of the producer and director – all else in the production, no matter how starry their name, were of lower billing. For it is a mark of respect, and admiration, that the creative force, and not the marketing force, should be so highly perceived; in much the same way that an eager public would flock to see ‘the new Picasso’ rather than ‘a painting featuring Picasso’s mistress.’

Artistic, brimming with beauty and unashamedly nostalgic, these productions, invariably period dramas, have offered the movie aesthete an escape from the humdrum of Hollywood. The San Francisco Chronicle once wrote that the Merchant Ivory partnership connoted a genre in itself; “stuffy, worthy, well-acted entertainment, sumptuous in its sets.” ‘A Room with a View’ is without doubt one of the most famous, and most admired, of these productions. Set in Edwardian England, boasting Helena Bonham Carter, Daniel Day Lewis, a Puccini soundtrack, a fistful of Oscars and fabulous costumes, it is a paean to the triumph of beauty over social convention.

Costume plays a particularly important part in the story. The heroine, Lucy, finds herself drawn between the cultural snob and dandy, Cecil Vyse and the somewhat less refined and brooding George Emerson. However, despite the efforts of representation in the film, to convey Vyse as a cold, mirror-gazing fop and Emerson as a less decorated, more wholesome individual, it is difficult to regard all the ensembles as anything but perfect examples of Edwardian refinement. These bows and boaters mingle, as I have written before, perfectly with nature and the architecture that surrounds them. And, more than that, they illustrate so very well that, while certainly far more ornamental than gentlemen of today deign to be, that the ornament is not exaggerated, nor is the variety of ensembles without purpose or consideration of practicality or situation.

Take Daniel Day Lewis’ brilliantly insipid Cecil Vyse; though high starched collared, silk cravatted and pearl pinned, Vyse cannot possibly be ridiculed for ‘impracticalities’ of dress or ‘inappropriate elegance’ in simple surroundings. While always waistcoated, he adopts a jacket correct for the circumstance. Vyse in the Surrey summertime wears a lightweight linen jacket of casual structure when reading aloud during a game of tennis, wears a smarter white jacket to receive engagement well-wishers and when returning to town, the more formal Edwardian frock coat and bowler hat – reflecting his departure from the informality of the country. When in Italy, the gentlemen adopt lighter colours and lighter weights of fabric but never allow the temperature to alter their ensemble entirely. Even the younger gentlemen, enjoying a summer away from school, wear shirts, ties, striped jackets and cotton waistcoats.

Though invariably white shirted, the gentlemen exhibited great variety of neckwear, waistcoats, hats and footwear – is there anything more divine than a creamy white lower half in summertime? – and offered excellent reasons, both practical and aesthetic, for adopting lighter colours in the warmer months. There were also numerous reminders that wearing trousers properly, on the waist, is far more flattering than wearing them halfway down one’s legs.