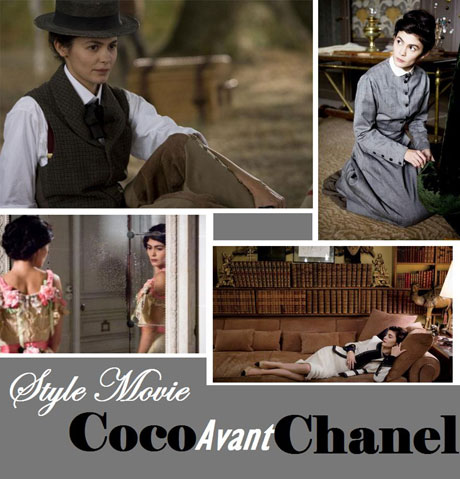 One of the most interesting things about ‘Coco Avant Chanel’ was that for all its triumphant, feminist messages about suffragette-era women, succeeding ‘in a man’s world’, and rejection of conformity (including the institution of marriage), it actually paid peculiar, and not necessarily intentional, homage to the man.

Certainly, the ‘beast’ was duly embarrassed; boorish aristocrats proved to be no match for the cutting wit of little Coco, very well played by Audrey Tatou, who flicked her French fingers facetiously, clucked disapprovingly and smoked incessantly whilst the men surrounding her somehow succumbed to her interesting beauty and evident charm. She practically devoured Balsan, the boozy beast in the castle, and though she was certainly ‘targeted’ by the love interest, Arthur ‘Boy’ Capel, you couldn’t help but conclude it was she who had fired the arrow.

However, the reason the film was made was not because Chanel was simply another story of a determined woman who had battled sexism and prejudice before feminism had been invented, but because she was a fashion designer. The message of the film was valid but I was far more interested in what had possessed this sometime milliner, what had influenced her in achieving not, as some have concluded, merely parity with men but a style of such simplicity and grace that it completely changed the way males and females perceive dress.

The irony of the film is that Chanel inadvertently credits the timelessness and refined simplicity of Edwardian male style. It’s obvious that she isn’t wearing trousers, boaters, shirts and jackets simply because she is rebelling but because they appeal to her. And, of course, though men are blamed by Chanel for imprisoning women in the over-elaborate dresses of the early 20th century, she also admires them for the way they wear their own clothing. She copies them, borrows from them and not only finds inspiration in them but also genuine friendship; it’s very odd that so many have written it up as a battling, feminist tour de force.

To view her adaption of male clothing, pyjamas and rejection of frilly fuss as merely bog-standard, feminist nose-thumbing is to miss the point; Coco Chanel was an aesthete who happened to respect male clothing more than female clothing and it was clear she had not merely made a self-conscious decision to reject male oppression. Some of her comments about corsets and skin-exposure did have resonance of suffragette grievances but largely, her adjustment of female clothing seemed to have a lot more to do with her distaste for overcooked fashions.

Beautifully presented, Anne Fontaine’s film has plenty of examples of majestic menswear; glorious white tie, country tweeds and pre-war pinstripes. As much as it is a toast to one of the most influential personages in fashion, and one of the most famous women of the twentieth century, it is also a nod to Chanel’s famous line; “Fashion fades; only style remains the same.”